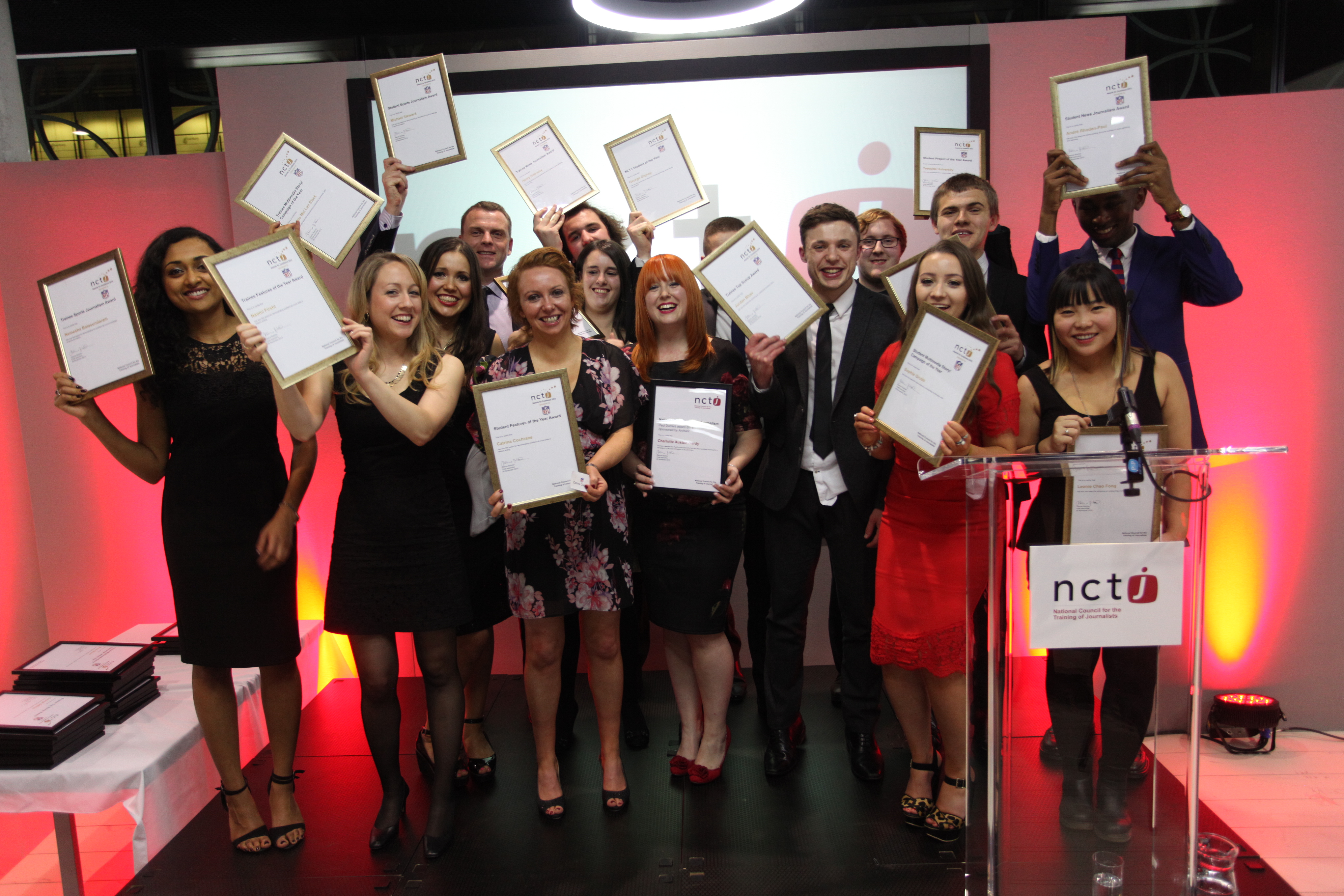 Student and trainee journalists were honoured at an awards ceremony announcing the winners of the NCTJ Awards for Excellence sponsored by NFL UK in Birmingham on Thursday.

Over 40 journalists representing 14 categories attended the awards dinner at the Library of Birmingham hosted by the BBC’s Nick Owen. He revealed who had won in front of a host of journalists, editors and tutors at the event.

Nick said: “Everyone who has been shortlisted should be immensely proud of their work. They’ve demonstrated the combination of writing skills, determination and resilience that they’ll need to forge a career in journalism. And they’ve impressed our expert judges along the way.”

He went on to say: “The winners of these awards are living proof there’s plenty of talent out there delivering reporting of the highest calibre.”

David Tossell said: “Well done to everyone who was shortlisted and special congratulations to the winners of this year’s awards. The quality of your work shows that you are hard-working and passionate about your craft and I wish you all well as you go forward as the next generation of journalists.”

In total there were more than 220 submissions to the Awards for Excellence. Student entries were produced during an NCTJ-accredited course or distance learning course. To enter the trainee categories, journalists must have been working for less than two years’ in any sector of journalism and have completed the NCTJ Diploma in Journalism.

This year’s student journalist of the year was presented to George Gigney. George studied at News Associates London and was funded by the Journalism Diversity Fund. He achieved the highest marks across all his exams as well as 120wpm in shorthand. George now writes for Boxing News magazine full-time.

Trainee journalist of the year was awarded to Katie Dickinson of The Westmorland Gazette. She passed her NQJ in March 2015 with the highest marks across all UK candidates, winning the Ted Bottomley award for her performance in the media law and practice exam. Katie completed her NCTJ diploma at the University of Salford.

The first winner of apprentice of the year was Daniel Wright. During his two year apprenticeship Daniel completed his NCTJ Diploma in Journalism and has secured a position as a trainee journalist with the KM Group.

André Rhoden-Paul won the student news journalism award. André studies at the University of Sheffield, the judges said he submitted “a good variety of material that demonstrated a deep desire to unearth exclusive strong human interest stories, even from the most routine of  assignments…” André currently freelances for The Guardian.

Bagging the trainee news journalism award was Henry Holloway of The Argus. Henry joined The Argus after completed his NCTJ diploma at Brighton Journalist Works.

The winner of the student sports journalism award was Michael Steward of St Mary’s University. Before becoming a journalist Michael had originally spent seven years as a sports lecturer in Suffolk. He has accepted a trainee position at the Saffron Walden Reporter and Dunmow Broadcast.

Taking first place for the trainee sports journalism award was Nemesha Balasundaram with the Irish Post. Nemesha’s work was praised by the judges who said: “Nemesha’s portfolio showed off her strong interview and writing skills and her feel for a story. By allowing quotes to breathe there was a natural flow to her writing which made for well-structured, easy-to-read and insightful stories.”

In the trainee top scoop/exclusive category, Jordan Bluer, of the Dover Express won. The judges said: “Jordan recognised the enormous value of this human interest story, displaying compassion and excellent social skills to build a rapport with the subject and encourage him to open up in a moving interview about a difficult subject. It was well written, and the fact that it was so widely followed by the national media demonstrates its impact as a genuine scoop.”

For the student features category, Catrina Cochrane scooped the award. Studying at Glasgow Clyde College Catrina has recently completed a project called Dearest Scotland, which won the student multimedia story/campaign award in the 2014 Awards for Excellence.

The winner of the trainee feature award was Naomi Firsht, a journalist at the Jewish Chronicle. Having studied at News Associates, Naomi travelled to France earlier this year to cover the after-effects of the kosher supermarket attack.

Sophie Grubb picked up the student multimedia story/campaign award. Sophie, studying at the University of Sheffield, won for her adaption of her brother’s unpublished autobiography on living with Asperger Syndrome. The judges described it as: “A piece which pulls at the heart.”

In the trainee multimedia story/campaign category, Sophie Mei Lan Slack came up trumps with her ThankYouNHS campaign. Sophie, who received a training bursary from the Journalism Diversity Fund, has been a winner in previous years: she won the student top scoop category in the 2013 Awards for Excellence.

The student project award went to Teesside University and their student project called The North Crowd. The entry was commended for its coverage of local news, music, film and art in the North East.