Sophie Mei Lan Slack and George Gigney were presented with certificates at the event hosted by the BBC’s Nick Owen.

George, who completed his NCTJ Diploma in Journalism exams this year, was named as student journalist of the year after achieving the best exam results in the UK during the 2014/2015 academic year. 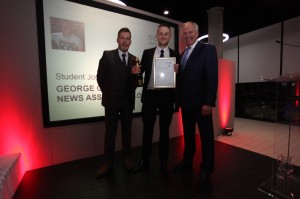 George completed his course at News Associates London where he did the sports media diploma. After, he interned at the Times Higher Education Supplement and Boxing News magazine, the latter of which he now writes for full-time.

“Although I didn’t expect it, winning the NCTJ student journalist of the year award seems the right way of paying the JDF back and I’m hugely proud of it.”

Sophie, who was awarded a bursary in 2012, won the trainee award for multimedia story/campaign of the year for her campaign ThankYouNHS. She started it to show her gratitude to the healthcare her child received and the respect and dignity she was treated with while at the hospital. Through social media, video, pictures and even poetry, Sophie’s campaign received wide acknowledgement and support. The judges praised Sophie’s work for journalism in which “near tragedy was turned into a superb campaign”.

This is not the first time Sophie’s work has been recognised as she also picked up a top scoop/exclusive of the year award at the 2013 Awards for Excellence when she was a student. 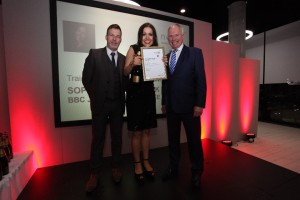 Sophie completed a postgraduate diploma at the University of Salford and is currently on the BBC journalism trainee scheme. She has made films with new online platform BBC Raw and previously freelanced for the Yorkshire Weekly Newspaper Group.

Sophie said: “I wouldn’t have got into journalism properly if it hadn’t been for the Journalism Diversity Fund, they gave me my first break in journalism and aside from some freelance work I just couldn’t afford the training. I love journalism and I’d like to think I do it from the heart but it’s hard to get very far without an NCTJ diploma behind you. With the JDF they gave me the chance to have the support and the money to get my diploma and MA at University of Salford.”

The NCTJ Awards for Excellence, sponsored by NFL UK, recognise and reward the best journalism students completing NCTJ-accredited courses with less than two years experience on the job.

Students and trainees who were shortlisted were invited to the gala dinner as guests of the NCTJ and NFL UK. The winners received their awards in front of a host of journalists, editors and tutors at the annual event which was held in the Library of Birmingham.