Three Journalism Diversity Fund recipients were presented with bursaries yesterday as part of the annual celebratory event, which was hosted by Google News Lab at their King’s Cross offices.

After another successful year of fundraising, two recipients were awarded with the Thomas Read bursary, which is awarded each year to a Journalism Diversity Fund recipient who has a long-term illness, health problem or disability. 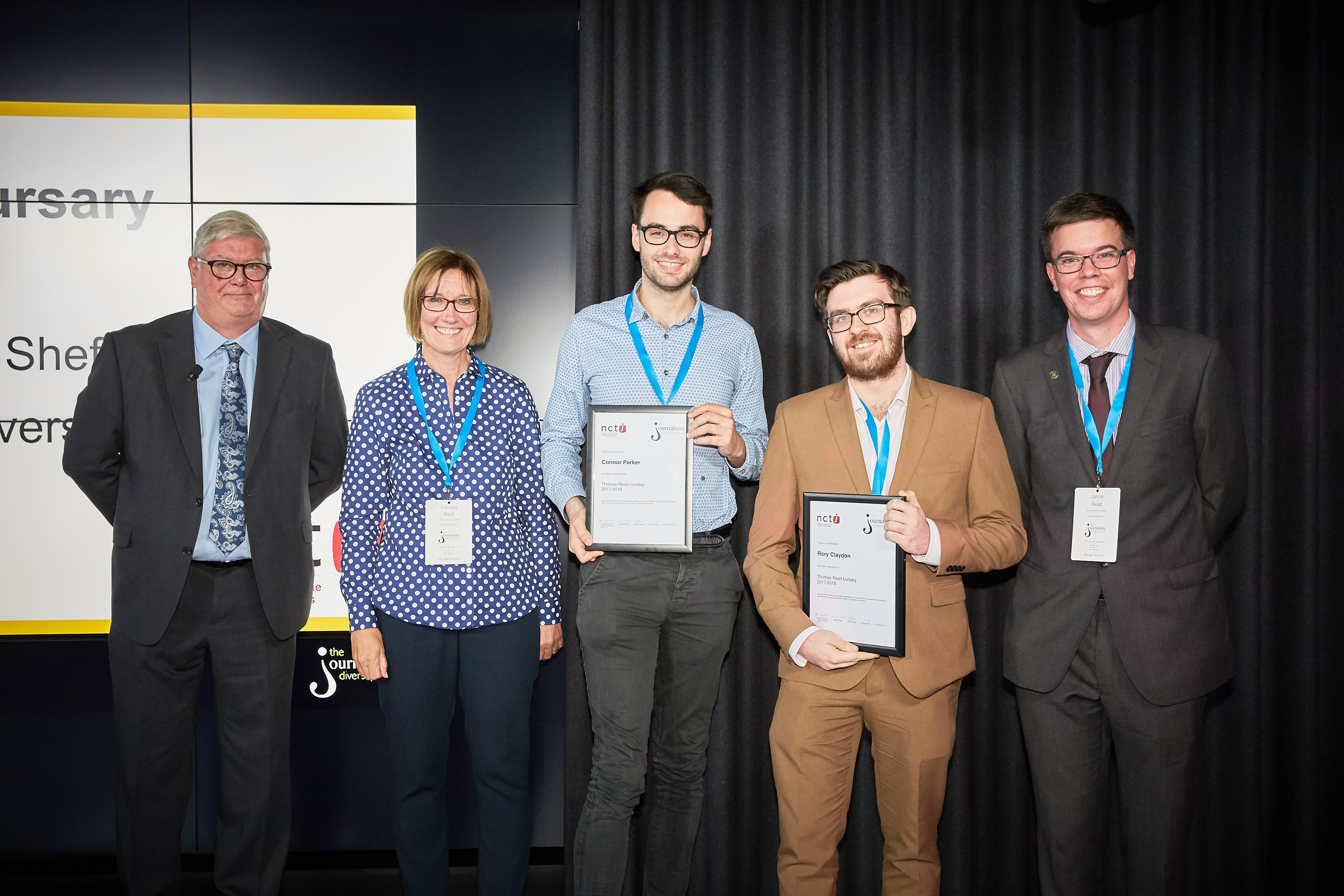 Connor Parker, of the University of Sheffield, and Rory Claydon, of Cardiff University, were both presented with their awards by Carolyn, Kevin and Jamie Read. As well as receiving financial contributions to help fund their NCTJ training, both recipients will also have the opportunity to participate in a work placement at Sky Sports News.

The bursary was set up in the memory of the Sky Sports News journalist Thomas Read, who died unexpectedly in 2015, aged 25. Thomas was an inspirational young journalist who, in spite of his cerebral palsy, achieved a substantial amount in the field of journalism in a short space of time.

Speaking at the event, Thomas’ father, Kevin Read, said: “Two years ago, our initial aim was to raise £15,000 and award three bursaries to young journalists. Now, having already raised £30,000, we want to reach £50,000 and award ten bursaries.”

Also presented at the event was the Claire Prosser bursary, which is designed to help people from all walks of life into broadcast and digital careers, and was set up in the memory of founder and former director of the BBC Journalism Trainee Scheme, who died suddenly in 2014.

In the words of her family, Claire Prosser believed in equality of opportunity, and that if someone wanted the chance to become a journalist, they should be able to do so. 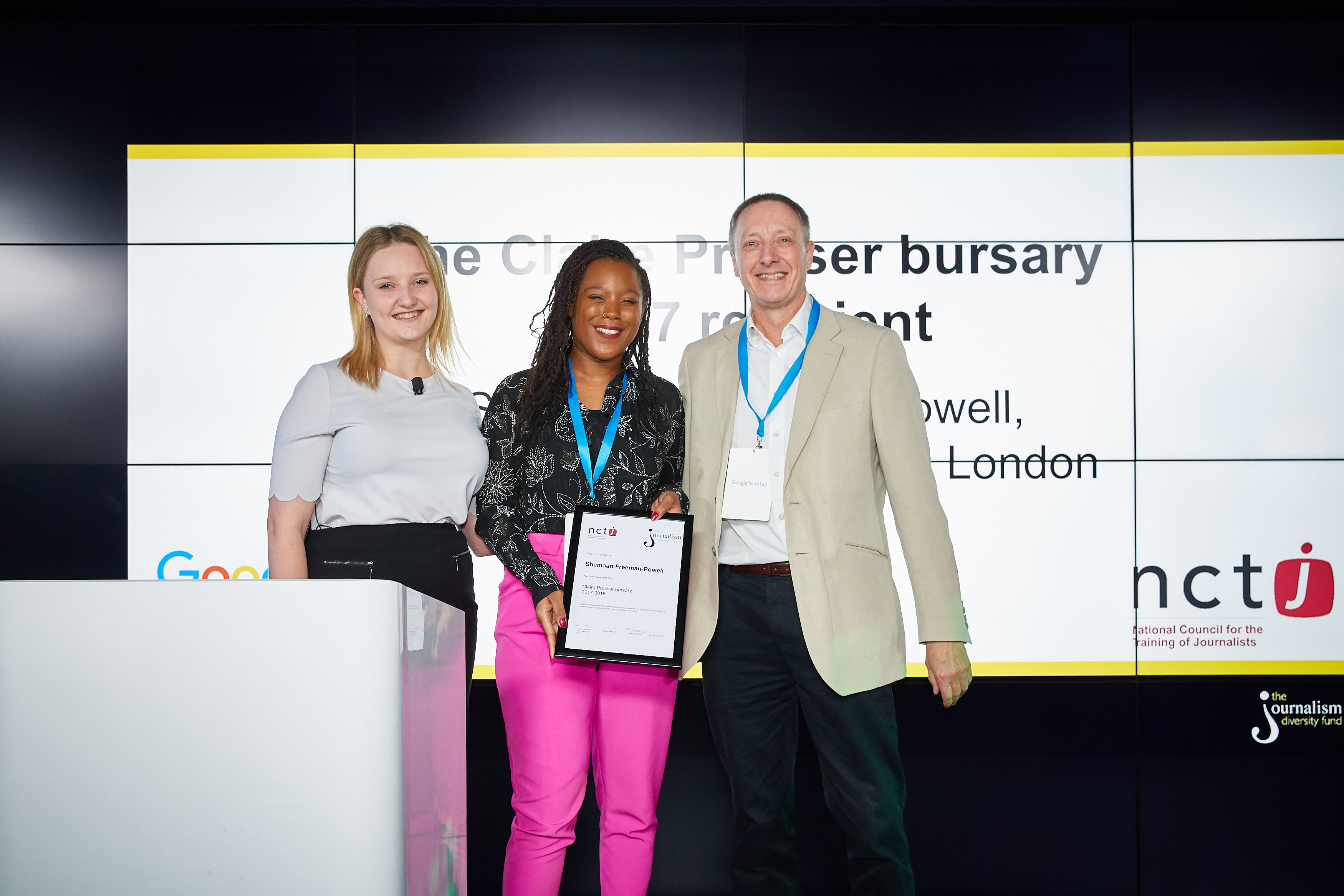 This year’s bursary recipient, Shamaan Freeman-Powell, was presented with her award by Paul and Ellen Clabburn, Claire’s husband and daughter. Addressing the audience, Ellen said they were particularly impressed with Shamaan’s digital showreel, part of which showed Shamaan standing in Storm Doris to demonstrate her exemplary determination and work ethic.

The celebratory event, which took place after a journalism in diversity seminar, also welcomed previous JDF recipient, Charlotte Ryan, to the stage to address delegates.

Charlotte, who received funding from the Journalism Diversity Fund in 2015-16 to study at Glasgow Caledonian University, now works as a reporter for Bloomberg and said: “I couldn’t see a way to achieve my goals until I found out about the Journalism Diversity Fund. I have no doubt that I wouldn’t be where I am now, working as a full time reporter at Bloomberg if it wasn’t for the fund.”

Offering advice to her fellow bursary recipients, she said: “What the JDF does isn’t just about the people like us that it helps. This scholarship and all of us play a vital part in addressing the lack of diversity in the media overall.

“When you finish your course and join a news organisation, you will see immediately the benefit your diverse experiences can bring.” 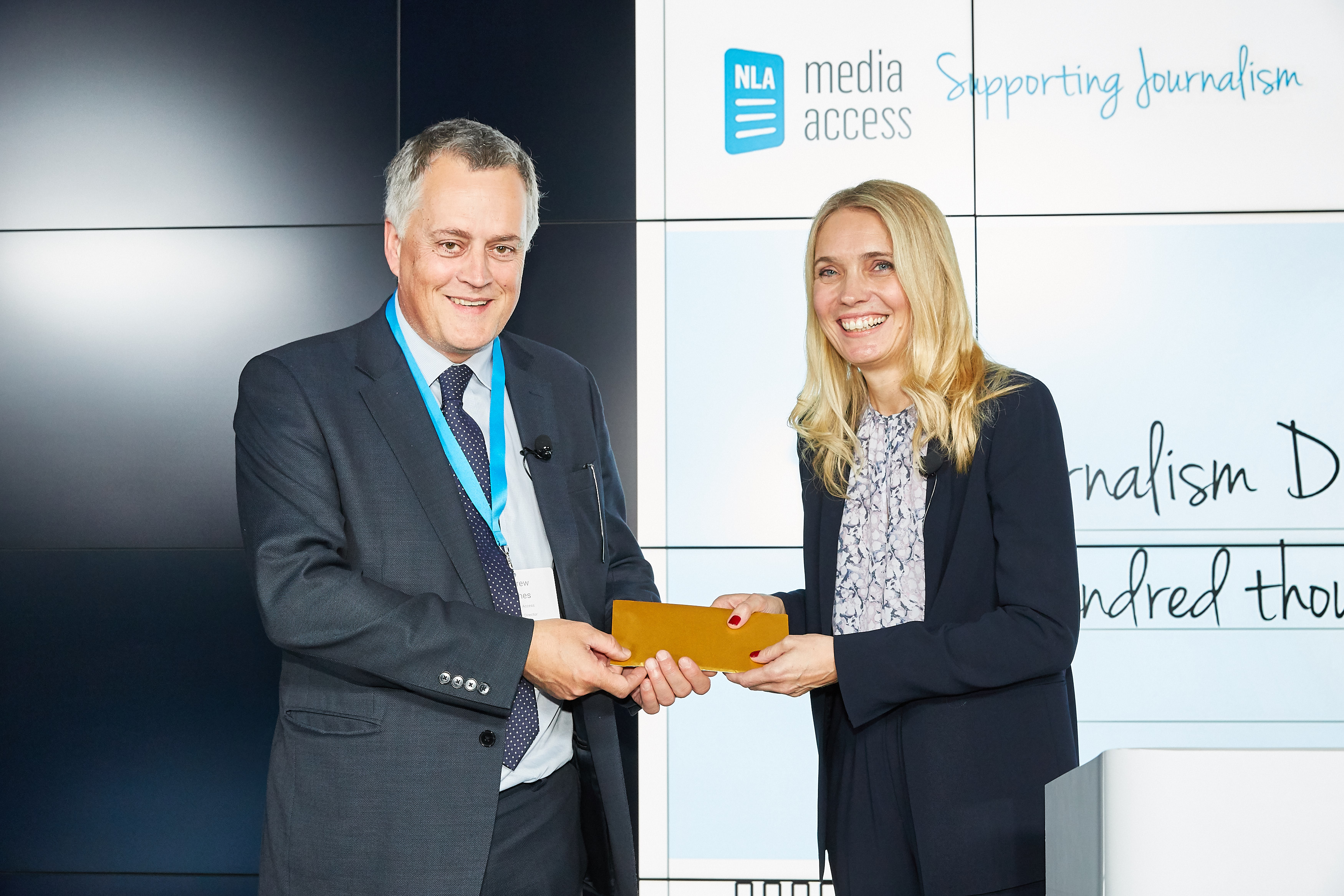 Andrew Hughes, international director of NLA media access, also addressed the audience, after presenting Joanne Butcher, chief executive of the NCTJ, with a cheque for £100,000. He said: “NLA media access is owned by the UK press, and our mission is supporting journalism by ensuring businesses which rely on newspaper content can do so easily and legally.

“The board and staff of the NLA are proud of our association with the great work done by the NCTJ Journalism Diversity Fund, and especially with the recipients of the JDF bursaries. The £100,000 grant takes the total donated since 2005 to £1.2m. Even in challenging times we know this is money well spent.”