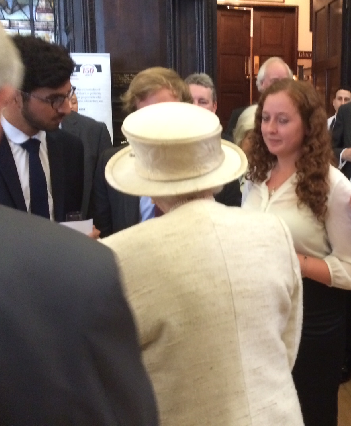 150 years of the Journalists’ Charity. Those attending included talented young journalists who had received awards for their outstanding performances in NCTJ exams.

The young journalists joined newspaper editors, columnists, television broadcasters and senior executives from the media industry to meet the Queen, who is patron of the charity, and the Duke of Edinburgh. The charity’s chairman, Laurie Upshon, hosted the event and introduced guests to the Queen. Among the guests were NCTJ alumni Mark Austin, Anna Botting, Doug Wills and Bob Satchwell.

Joanne Butcher, chief executive of the NCT,J explained that although journalism had changed so much, some traditional skills, like shorthand, remained just as important. Laurie Upshon recalled his own Pitman shorthand training at Harlow College and the Queen was intrigued to hear from the young journalists that they were taught Teeline shorthand and used it in their daily reporting tasks.

The Journalists’ Charity, founded by Charles Dickens and others in 1864, changed its name from the Newspaper Press Fund in 2005 to recognise the support it gives to working in all media sectors. The charity runs retirement, care and residential homes as well as providing emergency grants to those in need of help.

The Queen is pictured (right) meeting Lizzie Dearden, who trained with News Associates and on the Ilford Advertiser, and now a news reporter on The Independent.