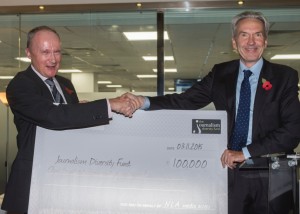 Leading journalists, editors and industry professionals from across the UK, celebrated alongside bursary recipients and their tutors on Tuesday, 3 November at a special event to mark 10 years of the Journalism Diversity Fund.
The reception, hosted by the Daily Mail was attended by 84 guests at Northcliffe House in London.
Charles Garside, managing editor of the Daily Mail, welcomed guests to the event.
He said: “We hope the Journalism Diversity Fund will flourish over the next 10 years.”

David Pugh, managing director of NLA media access, presented Kim Fletcher, chairman of the NCTJ with a cheque for £100,000 to continue the work of the diversity fund.

David Pugh said: “Supporting journalists from disadvantaged backgrounds is vital if the media is to retain a voice that is as diverse as the issues it reports on. We are committed to supporting the success of the newspaper industry and young people who want to forge a career in journalism. The Journalism Diversity Fund is fantastic in providing opportunities to applicants whose careers could otherwise be disadvantaged by their circumstance.”

Amber Haque and Rehema Figueiredo who received bursaries spoke about how the fund helped to kick-start their careers in journalism. Amber Haque, who was awarded a bursary in 2014 to study a postgraduate diploma at the University of Salford, is currently working her way through the BBC Journalism Trainee Scheme. 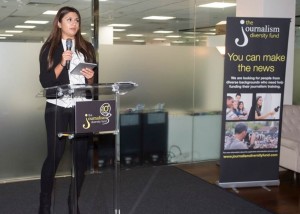 She told guests how the diversity fund had made a difference to her, saying: “Without the funding from the Journalism Diversity Fund I wouldn’t have had the time to research and chase down stories that led to my early success. I’m incredibly thankful for the opportunities the fund has provided over the past ten years.”

Fellow recipient Rehema Figueiredo was also awarded a bursary in 2014 for her to study a fast-track diploma at Press Association in London. Rehema has now been employed by the Daily Mail as part of their graduate scheme. 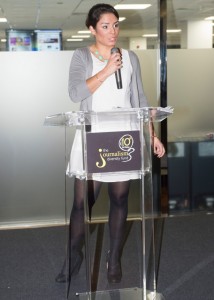 Addressing the guests at Northcliffe House she said: “I’m just at the beginning of my career but I’m so incredibly grateful to the JDF for its help and think it’s amazing that it’s been doing this for 10 years now. I think the key thing about diversity is that it’s the boosts given to people like me that shift things – it’s not about grand gestures or vague statements – it’s about embracing all of who you are and being good at what you do. It’s about being a success not in spite of your diverse background but because of it.”

Applications for the final 2015-16 cohort of the Journalism Diversity Fund close Wednesday, 4 November. Please click here to find out more information. Applicants can be sixth-formers, graduates or mature students, but they must have applied to an NCTJ-accredited course that takes place during the 2015-16 academic year and have a genuine need for a bursary.

See photos from the event on our Facebook page here.