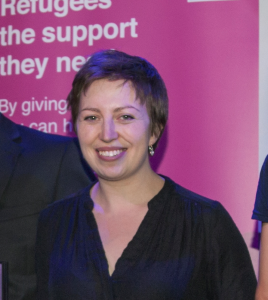 I’ve always hated freelancing – I don’t think people develop their skills best sitting at home, alone, on a laptop. I like structure, office space, and, you know, communicating with other humans. So I was very chuffed to get a week’s placement in an office and work with journalists, particularly as it’s the New Statesman, which I’ve always enjoyed reading. The deputy editor, Helen Lewis, was on the panel that first interviewed me for a JDF bursary, so it was good to meet her again now my training is over.
Three days before this placement began I’d sat my final NCTJ exam at the City of Liverpool College, but instead of relaxing and reflecting on an extraordinary five months with my classmates, I was travelling to a family wedding on the Saturday, then catching more trains to London on the Sunday. So I was knackered, frankly, before I even arrived on Monday morning, but quickly had enough interesting work to forget that.

Over the months at college, and while working as a reporter in Glasgow before that, I’d kept a list of all the things I really wanted to write about. The stories and issues that have gripped me the most in recent years – tax havens, surveillance, the scandal of blacklisting, computer hacking, land reform – things I don’t often get to write about in depth. But I’m well-versed enough in these issues to be able to write a quick pitch if they come up in the news, and luckily some did that week.

My favourite aspect of working as a reporter or writer is the opportunity to explain a vitally important but fairly complicated topic or problem to a wide audience. To unpick something that might seem dull or complex, and show how it affects everybody, how it links up with other issues – that’s a real pleasure. So being able to write about the strange phenomenon of Scottish shell companies, anonymous vehicles linked to all manner of crime and tax avoidance, was great fun. I have google alerts related to the issue and keep track of it with Twitter lists, so I was aware there were a few news stories related to this breaking over the week. This gave me a news hook to pitch to the digital editor, who luckily said yes. It was great fun writing this piece – finding experts to interview, including the MP who had worked hard on reform, was fascinating.

Over the weekend I’d noticed that a lot of people online were wondering what lay behind the SNP’s vote to reintroduce tail docking for puppies, as it seems to go against their political rhetoric and annoyed a lot of supporters. I had a hunch about what it might be linked to, and spoke to some of the opposition MSPs involved in the vote, and so was able, hopefully, to shed more light on the issue for some readers. I also wrote about homophobia in schools, sparked off by an alleged incident that was circulating online on Monday morning. Then late on Tuesday a massive malware attack began spreading across Europe, so in the morning I looked over my notes from Byline Festival where Lauri Love had been talking about the ‘WannaCry’ cyberattack and the role of hackers in stopping it. The same thing had happened with this new attack, and I found the series of tweets put out by the hackers in Boston as they worked through the night to stop ‘NotPetya’. It seemed really extraordinary that governments were seemingly floundering over this threat while three guys with pizza and beer were halting a lethal cyberattack. I had wanted to write about ‘ethical’ hacking and tech for ages anyway, having been gripped by Gabriella Coleman’s book about Anonymous last year, so this news story again provided a good hook.

Chatting about Scottish politics in the pub with the editor led to me writing a blog the next morning about Scottish Labour, which I wouldn’t have done otherwise – I think that’s why the chance to work with people, face to face, is so important – you can bounce ideas around and get useful feedback. Finally I wrote about undercover policing, interviewing an activist crowdfunding to get the official inquiry extended to Scotland by means of judicial review. I had bitten off rather a lot here as it’s a huge topic to introduce in a few paragraphs, and as there’s a lot of legal stuff involved I was checking and re-checking the facts on Friday afternoon as I wrote this up. The week of trains, sofas and hostels was really catching up with me by this point! It was good to get back to sunny Liverpool the next day. But I got more work done in that one week in the New Statesman office than I ever did in a week of freelancing, and I’m very glad the JDF organise this placement each year. Their support over the last five months has been invaluable; many thanks to Alison Puttock for always being at the other end of the phone!