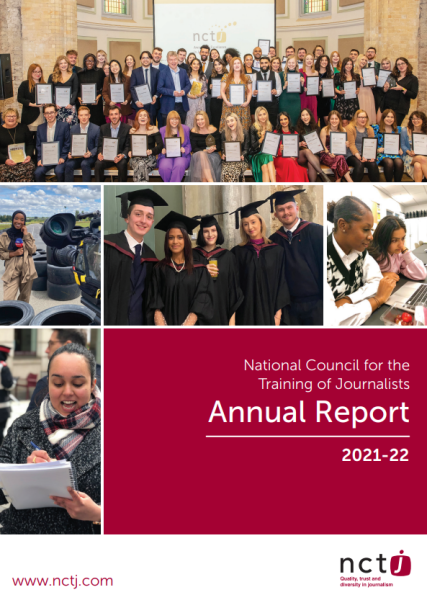 Alex Crawford, special correspondent for Sky News and patron of the NCTJ, has described 2022 as a “stunning year” for journalism as journalists get to the heart of seismic events.

Writing in the NCTJ’s 2021-22 annual report, published today, Alex talks about how journalists and journalism have risen to the challenges constantly being thrown their way.

She said: “They have been a force of nature and it’s been stunning to watch, witness and be part of. I was in either Ukraine or Afghanistan as the ‘Partygate’ scandal played out over weeks and months. But it was gripping watching superb journalists set the political agenda with expose after expose.”

In her address, she makes special mention of Pippa Crerar’s work for the Daily Mirror and Paul Brand’s for ITN, whose “combined assault on obfuscation, denial and deceit at the very heart of Government by journalists whose joint force and determination to speak truth to power, did just that. It’s what we all entered journalism to do, isn’t it?”

What a year. Military wars. Political wars. Economic wars. And how journalists and journalism have risen to the challenges constantly being thrown their way.

Surely there can be no better time to enter journalism or work in it.

This year we’ve seen explosive journalism pile pressure on the Prime Minister – with the first sitting PM to be found guilty of breaking the law. We’ve seen journalists investigate war crimes in Europe and be shot, maimed and killed whilst covering the fighting. And we’ve seen journalists navigate the country’s economic chaos, translating complex data into information audiences can easily understand.

They have been a force of nature and it’s been stunning to watch, witness and be part of. I was in either Ukraine or Afghanistan as the ‘Partygate’ scandal played out over weeks and months. But it was gripping watching superb journalists set the political agenda with expose after expose.

Pippa Crerar (Daily Mirror now Guardian) and Paul Brand (ITN) led the way in exposing the mountain of denials over the gatherings in Downing Street during lockdown. Every denial was nailed to the post of truth as they were overturned, picked apart and blown wide open with the journalists’ incontrovertible evidence – every journalists’ dream.

As Pippa Crerar herself said: ‘Right until the end, the PM thought of Partygate as trivial. But it was never about cake or bubbly. It was about there being one set of rules for him, one for everybody else. The Sue Gray report vindicated every single line of our journalism.’

And even when she was picking up the first of no doubt several awards for her sterling work at the inaugural Society of Editors Media Freedom awards in November, Pippa paid tribute on Twitter to her competitors and friends in the lobby. ‘I’m sharing my Investigation of the Year award with Paul Brand of ITV for Partygate.

We may have been first,’ she tweeted, ‘But he also had many scoops on the story. (And we both got so much s*** for it). I’m going to cut it in half and give his to him when I next see him.’ This was a combined assault on obfuscation, denial and deceit at the very heart of Government by journalists whose joint force and determination to speak truth to power, did just that. It’s what we all entered journalism to do, isn’t it?

Like so many other foreign correspondents, I’ve spent much of the year covering the war in Ukraine and watched with admiration and respect at how journalists not only come together in the most dire of times but also how powerful our voices are. And journalists have paid a high price for being on the ground seeing for themselves what is happening. Within weeks of the war starting, far too many journalists were dying, being blown up, shot at and maimed whilst trying to get at the truth.

And as well as dodging bombs and bullets, reporters need to go armed with a sturdy ‘bulls**t shield’….to try to work out what’s true and what is not. And often the only way of doing this is by seeing and getting the evidence yourself. That is easier said than done, even if you have your journalistic boots on the ground.

All sides in this war are pretty coherent media manipulators, none more so than the Ukrainians. The Ukrainian authorities are incredibly media savvy and led by President Zelenskyy himself, they have controlled much of the public agenda by expert use of the media. They are obviously aided by countries such as the UK and USA and those nations’ officials are also drip-feeding information to reporters and outlets which then go onto shape the agenda – but the Ukrainians are top of their field.

They’ve done much of this by controlling access to the battlefield. It’s becoming more and more challenging to get close to Ukrainian troops on the frontline. Journalists are managing it and that is important to get a sense of how the war is going. But I would argue, it is most definitely not the only way of finding out information and in fact can be downright abused with reporters getting a very skewed view of the war if they rely simply on military movements.

There have been some notable bear traps, for sure. There are in every war. It’s been fantastically difficult to get access in Russia, for a start, with journalists like my Sky News colleague Diana Magnay in Moscow having to dance on a very dangerous tightrope telling the truth whilst working under the country’s strict media laws.

All the journalist teams operating inside Russia are extremely courageous in my opinion and know any single word or consonant out of place could have dire personal consequences. But the Ukrainians too are not above using and misleading journalists. Reporters were effectively kept away from Kherson for instance by the Ukrainian authorities and denied access to the muchheralded southern front counter-offensive.

It very effectively duped the Russians into relocating their troops to the south whilst in fact the Ukrainians were moving on the north-eastern front instead. The Russians were comprehensively duped but so were the journalists. The Ukrainians were then able to launch a lightning blitz on Kharkiv, thereby setting off a chain of events which has so adroitly given them the upper hand right now. So far journalists and editors have passed off the multiple misleading statements by the Ukrainians as part of the ‘fog of war’ or maybe even convinced themselves it was necessary – but misleading, it certainly was.

While every journalist who’s covering Ukraine knows only too well that battlefield access is phenomenally controlled by a series of Ukrainian military press officers, it’s still possible. However, many have been pouring more resources into finding alternative ways of covering the war.

A lot of focus has been put on investigating war crimes and atrocities carried out by the invading forces – as well as spending time with the volunteers, the medics, and the civilians right at the centre of this invasion and who can often provide the most telling – and most accurate – testimony about exactly what is going on.

And against this backdrop of war, the economic turmoil in Britain has been playing out with some outstanding coverage and analysis from a stream of incredibly wellinformed economic journalists such as Sky’s Ed Conway and the BBC’s Faisal Islam. What a time to be a journalist in so many diverse fields and to be at the heart of such seismic events, explaining them, interpreting them and putting them in context for an audience growing ever more eager for informed and dependant reportage.

It’s been a stunning year for journalism with so many different outlets and journalists rising to the challenges with aplomb and creativity. What a year. What a maelstrom of events so no better time to launch the NCTJ’s safety and resilience workshops. It’s a cracking idea and I was desperately disappointed to have missed the inaugural workshop due to some real-life resilience I had to put into action because of an emergency on the home front. Forgive me for missing it – but I fully intend to be part of future discussions on this essential subject. There is so much for us to be inspired about in this industry – and so much for us all to learn.