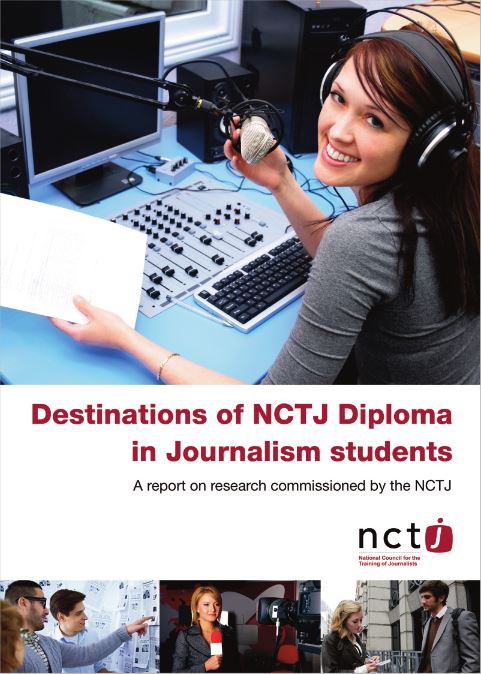 The vast majority of successful graduates from NCTJ Diploma in Journalism courses are quickly getting jobs in the industry, new research has revealed.

A total of 96 per cent of those who attained the gold standard in their studies – A-C grades in all NCTJ exams and 100 words per minute shorthand – told researchers they were working when questioned within 6-10 months of finishing their NCTJ-accredited courses. And 86 per cent of them said they had secured a journalism-related job.

The independent research, Destinations of NCTJ Diploma in Journalism Students, was commissioned by the NCTJ and designed to provide comparable results to the graduate destinations survey conducted by the Higher Education Statistics Authority (HESA). Mark Spilsbury designed the research and authored the report, with BMG Research undertaking the fieldwork.

Print publishers are the most likely first-job destination. The research found that 30 per cent of those who were working had jobs with newspapers, followed by magazines (11 per cent), online or digital (9), television (7) and radio (4). Of the rest, 6 per cent are working in public relations and 35 per cent in other sectors.

The majority of the jobs (58 per cent) are full-time or open-ended, with a further 13 per cent on contracts of 12 months or longer. Again, gold standard diploma graduates fared best with 68 per cent of them in a permanent job.

But the rewards for those starting out in journalism lag behind. The median salary for NCTJ Diploma in Journalism graduates is £15-20,000, less than the £20,500 figure for higher education graduates as a whole.

Among those with a job in journalism, the research found 77 per cent felt that having their NCTJ qualification was required (37 per cent said it was a necessity, 40 per cent that it was an advantage).

Looking back at their courses, 77 per cent reported the diploma prepared them well for employment – and this rises to 96 per cent for those with the gold standard and 85 per cent for those completing the diploma. In detail, 81 per cent said their law training had been useful or very useful, with high approval ratings for the other core skills of reporting (80 per cent), public affairs (65 per cent) and shorthand (62 per cent).

The research is based on a survey of 205 individuals who studied for the NCTJ Diploma in Journalism on an accredited course and were contacted within 6-10 months of completing their studies.

The report can be viewed here.