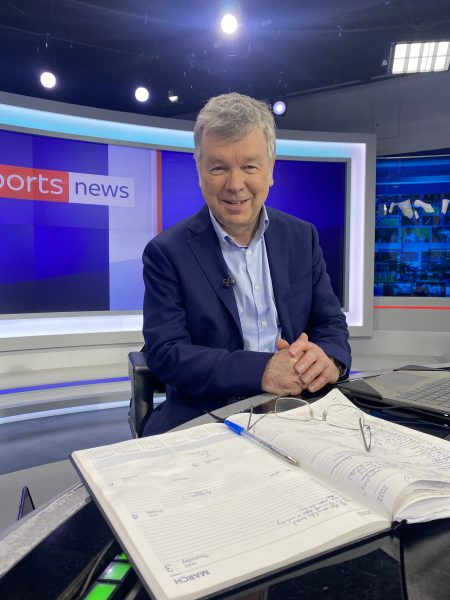 Award-winning broadcast journalist Nick Powell is to host this year’s NCTJ Awards for Excellence at Hallé St Peter’s in Manchester.

News UK is headline sponsor of the awards, which highlight the achievements of individuals with promising journalism careers ahead of them

The winners will be announced at the ceremony and lunch taking place on Thursday, 17 March, following an accreditation seminar for course leaders and industry advisers.

Nick completed his NCTJ training alongside a postgraduate journalism course at Cardiff University, and spent four years broadcasting on Pennine Radio News and Sport before becoming a news presenter at Yorkshire Television.

There, he worked on sports outside broadcasts, as a presenter, reporter and commentator on football, rugby league, cricket and boxing coverage.

In January 1996 Nick joined Sky as a news producer, but switched back to sports presenting before the year was out after missing live broadcasting.

He has been Sky News sports editor since 2010, and is a presenter on Sky Sports News.

Nick’s highlights include Super Saturday at the London Olympics, England regaining the Ashes after two decades at the Oval in 2005, Andy Murray’s first Wimbledon title, countless Grand Nationals, and broadcasting live from a bus driving around the Eiffel Tower at the 2007 Rugby World Cup Final.

Students and alumni will also recognise Nick as the ‘face of NCTJ exams’, as he has recorded scenarios for the NCTJ’s essential journalism exams since 2017.

Nick said: “I have been forever grateful for my NCTJ training in Cardiff, which has been the foundation of my entire journalistic career.

“I find you can tell pretty quickly whether a journalist has had NCTJ training or not. Invariably, the ones who have are the ones who write grabbing intros, don’t waste words and check everything. At the time, I remember thinking our Cardiff tutors were pretty brutal in their assessments, but the pain was worth it.

“It was a bit of an accident that I became the voice of the NCTJ exams, but I am always really happy to help – and I’m delighted to be a part of this awards ceremony. There have been one or two amusing incidents.

“I was in the coffee queue once, when a young producer, newly arrived at Sky, suddenly broke off a conversation with a friend on hearing me ordering my Americano. ‘Oh my God it’s you’, she said. ‘Hearing your voice took me right back into the exam room.’”

Sky News has also been confirmed as sponsor of the student and trainee data journalism awards, which are new for this year. These awards recognise the skills in visualising data, reporting stories from data sets and Freedom of Information requests and developing human interest angles.

Tickets for the Awards for Excellence ceremony and accreditation seminar can be booked here.