The NCTJ Awards for Excellence recognise the achievements of talented students, trainees and apprentices with promising journalism careers ahead of them.

Free to enter, this year’s awards are open for entries in news, sports, top scoop, features and podcast categories.

There are also specialist awards up for grabs for Community News Project reporters, NCTJ training providers and journalism employers.

We caught up with two 2019 winners, who told us what their awards meant to to them, and their advice for anyone considering entering this year. 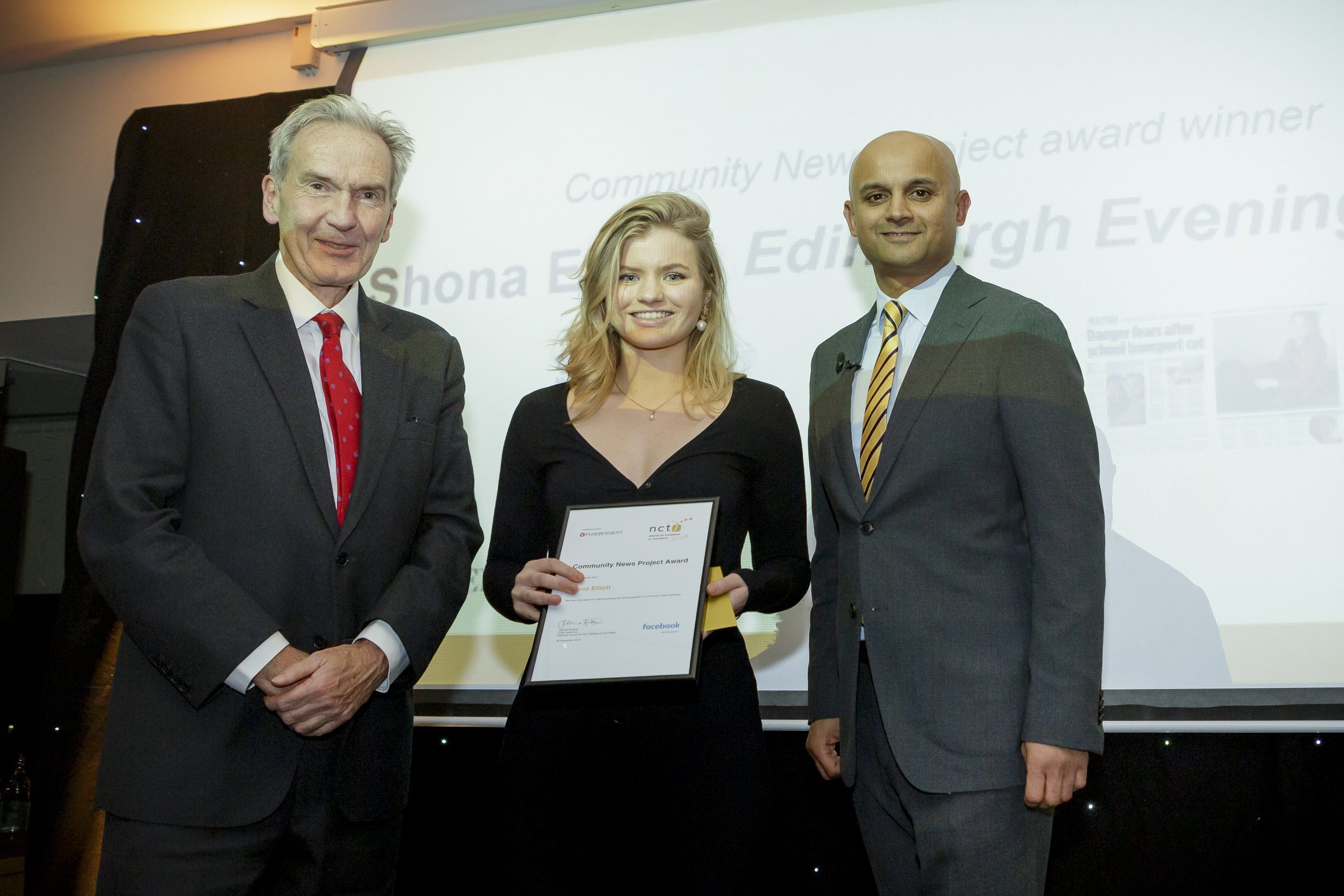 I submitted two stories, both focusing on additional support needs (ASN) education, an issue which has been severely underreported. My research into council reports showed that ASN education in Edinburgh has suffered severe cuts in recent years. I contacted affected families via Twitter and Facebook, and discovered many disabled children in the city have been left without access to education, compromising their development.

After publishing this story about cuts to ASN education I was contacted by several families whose disabled children had had their assisted transport to school removed without warning or explanation. I wrote a second story about Edinburgh City Council’s cancellation of disabled children’s assisted transport to school leaving many vulnerable pupils in danger. As a result of these, alongside pressure from parents, the council reinstated the transport until other arrangements can be made.

How did you feel when you heard your name called as the winner?

I went to the awards ceremony with the mindset that it was really nice to be nominated and this would be a good chance to meet other young journalists starting their career. I was extremely surprised when I won. I was really pleased, although it did take a few days to sink in.

It was good to meet other young reporters at the ceremony and I was delighted to be able to invite my family along too. They’ve supported me a lot so it’s nice to share these moments together.

Did it give you confidence in your reporting abilities?

It did motivate me to keep going, and told me I was on the right track. What really gives me confidence in my work is the feedback from the people whose stories I am writing. When I receive an email or phone call from a member of the community I serve telling me the article has helped in some way make their lives a little easier, that gives me confidence in my reporting skills.

Do you feel it shone a light on the importance of the work you’re doing?

I was really pleased that my stories were recognised because it shows that people are taking an interest in issues impacting the disabled community.

Any advice to people considering whether to enter the NCTJ awards this year?

I entered because my colleagues told me I should and I never thought I would be in with a chance, which just goes to show that the old cliché is true – you have to be ‘in it to win it’. So, why not just put in an application and see what happens?

Brendan Marshall studied on the MA journalism course at Ulster University and won the 2019 student top scoop award. Brendan now works as a journalist and producer for BBC Northern Ireland.

What does it mean to you to have won the top scoop award? 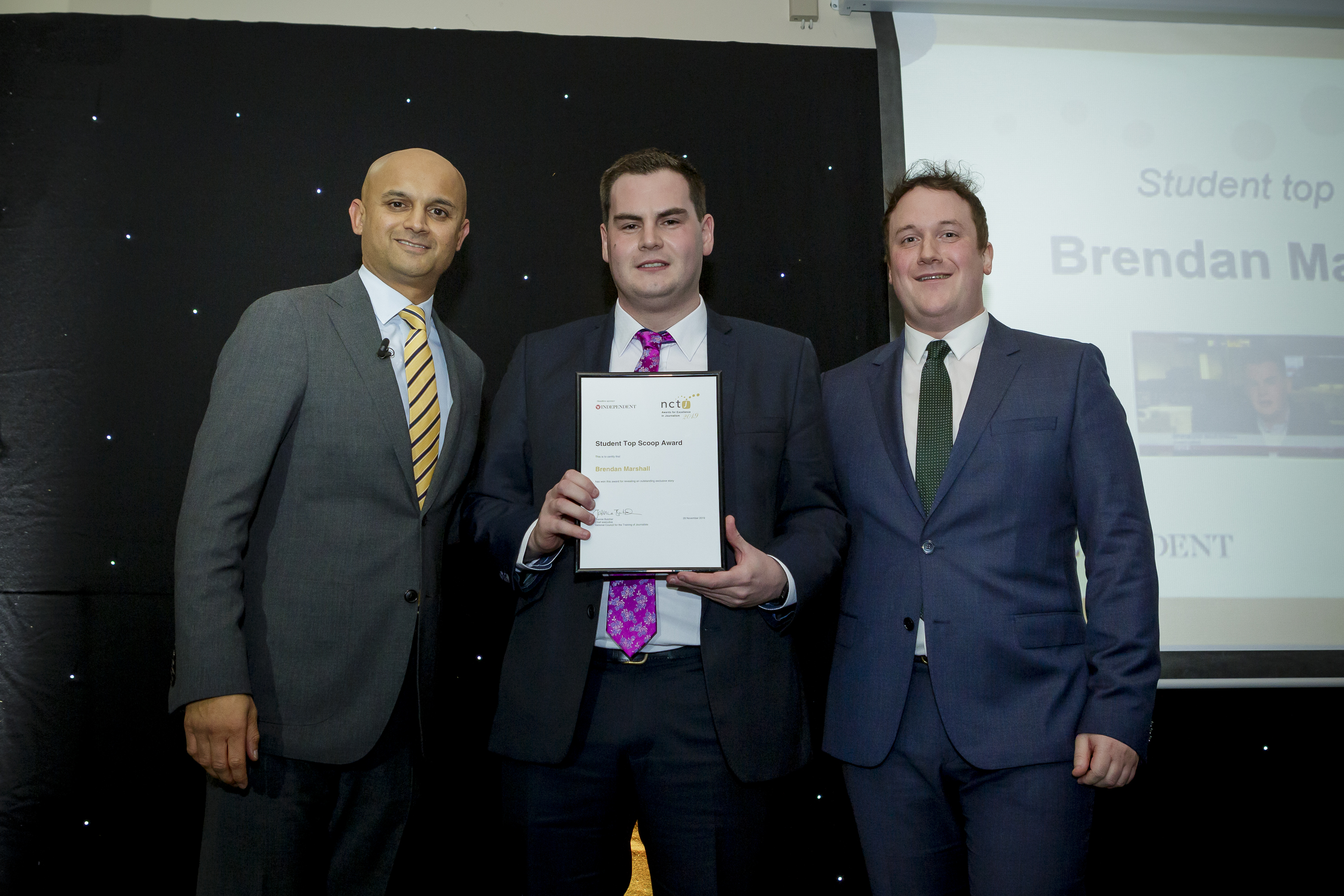 It is an absolute privilege and honour. I thought I had no chance of getting on the shortlist, never mind winning. Such an award goes a very long way in anyone’s CV and future career. It also means you can now add ‘award winning’ to your title or CV. That in itself is like having your blue tick on Twitter (I’m still waiting for that one though).

The awards ceremony is also a privilege to attend, you meet so many other excellent people with a similar mind-set and NCTJ training.

I feel winning the award has certainly shaped who I am and the job I do in building me with the confidence and the skillset that is very much needed during these more recent and challenging times that have come upon each and every one of us.

Tell us more about the story you won the award for.

My story is quite sad and it hits home for me because it happened in a nearby town and affected everyone I’m close to, including me. Three teenagers died after a crush outside a hotel, which was hosting a St Patrick’s Day party. The police said a large group of young people had been waiting to get into the disco.

I reported this tragic story across many platforms including the BBC network, BBC Breakfast and 5 live. In Ireland, I updated and reported for RTE on the night and in the days that followed after.

This story gave me my first real taste of what it was like to be a busy journalist but it also gave me an insight into how hard the job can be when it comes to being professional and keeping your emotions separate.

What would you say to a current student looking at entering the Awards for Excellence?

APPLY! APPLY! APPLY! You have absolutely nothing to lose. If you are serious about journalism, and have something to add, then apply and show everyone your work and talent and let the rest take care of itself. Good luck!

The 2020 Awards for Excellence are open for entries until Friday, 13 November. Click here to find out more.