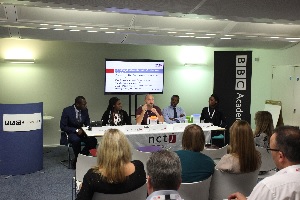 Current initiatives and barriers for diverse recruitment in the industry were discussed at the NCTJ Journalism Skills Conference on Friday, 27 November.

The panel, “A newsroom that looks like modern Britain – if not now, when?” was chaired by Abu Bundu-Kamara, director for diversity, Pearson and an NCTJ board member.

The panel discussed the importance of reflecting modern Britain in the newsroom, citing prominent research outlining diversity’s effect on the bottom line and innovation.

Tunde said: “If you want to be the best across the world, not just in the UK, you have to have a diverse newsroom.” He added the BBC are aiming to boost creativity by increasing diversity.

Jayde spoke from the BBC perspective reflecting on how it was paramount for TV license fee payers to feel that the content was relevant to as wide an audience as possible and that this was reflected in programming.

Robby said: “Journalism is all about talking to your community and engaging with everyone.”

He went on say that without the BBC local radio apprentices scheme, he would not be sitting on the panel or be employed as a broadcast journalist at BBC Essex.

The panel also spent time discussing the range of barriers that stop the media’s workforce from being diverse. The issues ranged from unconscious and conscious bias and salaries and contracts, as well as how certain stories and reports can disenfranchise certain communities from wanting to apply to a particular employer.

Tunde said that the BBC was tackling unconscious bias through training their senior leaders and also making job applications name-blind. He said: “Leaders need to be brave enough to take risks and force the issue and then support it.”

He added: “If you don’t move with the times you’re going to go out of businesses.”

Ese recognised that organisational change takes time and so diversity programs or schemes can be slow to develop. She also said it was important to remember that people were more than their diversity.

The panel ended with a debate about the ways newsrooms and the NCTJ could be more proactive in their recruitment, with Abu saying that the ideas and points raised would give him plenty to discuss in the next NCTJ board meeting.