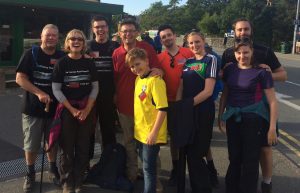 NCTJ staff previously fundraised for the Thomas Read bursary in July by running the City of London 5K race. The NCTJ have surpassed their fundraising goal of £1000 for the bursary and have achieved donations of £1400 to date.

Kim Aitchison, who participated in both the 5K race and the Snowdon climb said: “I’m extremely proud of how much money we were able to raise for the Thomas Read bursary. It was lovely to get to know the Reads during our Snowdon climb and I’m certain we’ll be joining them for their next fundraising venture soon!”

The Thomas Read bursary was established in 2015 with donations from Thomas’ friends and family. The bursary is awarded each year to the Journalism Diversity Fund bursary recipient who has demonstrated the qualities embodied by Thomas Read: passion for journalism, a determination to succeed and the ability to overcome adversity.

Thomas, who had cerebral palsy, studied his journalism degree at Cardiff University. He later worked for Sky Sports News full-time on their sports bulletin team until his unexpected death in January 2015.

The first bursary in his memory was awarded in November 2015 to Gemma Louise Stevenson who has recently completed her NCTJ course at St Mary’s University. She has been awarded a prized place on the BBC Journalism Trainee Scheme.

Sponsorship is still open for those who wish to donate by visiting our fundraising page, here.

To find out more about the Thomas Read bursary click here.

Pictures from the climb can be viewed on our Facebook here. Photos of the climb published by the Read family can be found here.