Journalists and industry professionals came together at the NCTJ’s equality, diversity and inclusion conference in a bid to tackle the challenges facing journalism and drive for change.

Held today at Reuters in London, the conference included panel discussions on topics related to diversity in journalism, including how to attract people from working-class backgrounds, top tips for progression and retention and how to make inclusion a priority in the newsroom.

Recipients of the Journalism Diversity Fund (JDF) were invited as special guests to the event, which celebrated how the fund has supported people from diverse backgrounds to begin their journalism careers since its launch in 2005.

The conference’s first topic of discussion was how to attract more people from working-class backgrounds into journalism.

The panel discussion came after a report published by the NCTJ this year found that there are ongoing issues with social class in the journalism industry, with 89 per cent having a degree-level or higher-level qualification, which is not reflective of the UK population as a whole. 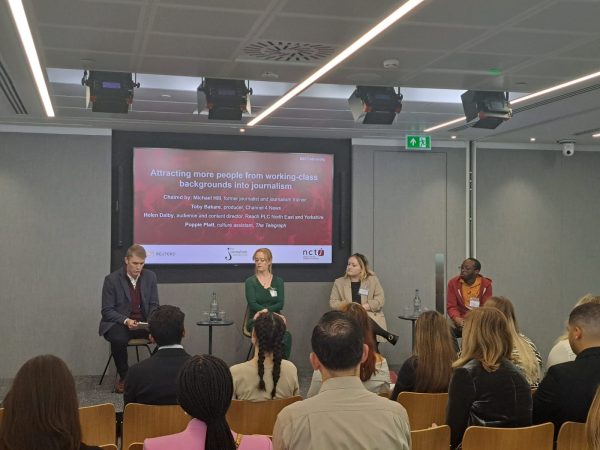 Chaired by Michael Hill, who is on sabbatical as course leader of the MA News Journalism programme at Cardiff University, the panel also included Helen Dalby from Reach PLC, Poppie Platt from The Telegraph and Toby Bakare from Channel 4 News.

Helen Dalby, audience and content director of Reach PLC North East and Yorkshire, said that the newsrooms in her area represent many working-class communities and it is important for the journalists to be a part of those communities.

She said: “If we are not representative in our newsrooms of those communities then you are not relevant and you are not able to give people news and stories that are relevant to them.

“Our reporters and editors live in these communities, they shop in the same high streets, go in the same pubs and use the same schools for their children. Regional newsrooms are a great training ground for representing local communities.”

Discussing how best to attract people from those communities into journalism, Helen suggested that the industry needs to reach out to schools.

She added: “We need to be starting these conversations much earlier. I think children need to know about the media and why it matters as they’re learning to read. A priority I see for 2023 is building back up that relationship with schools and doing that outreach.”

The panel discussed how people from working-class backgrounds can experience imposter syndrome and question whether belong in their news organisations.

Toby Bakare, a producer for Channel 4 News, said: “If you are from a working class or diverse background then you might not have that ‘I deserve to be there’ mentality. It’s sad to see that good, talented people feel that they can’t come to the table with an idea.

“That idea that someone has something on you because they are from a different background is a myth. If you are in a room then you deserve to be in it.”

Also on the agenda was retention and progression of journalists, with a panel discussing the topic chaired by Mark Hudson from News UK. The panel featured Olivia Heath, executive digital editor at Hearst UK and Lucile Kamar, head of diversity and inclusion at ITN.

Discussing the future of flexible working in newsrooms, Olivia said: “It’s a key priority now. People want that flexibility and we know that we can be more productive working from home. Organisations need to adapt with the way we live.”

The third panel of the day, which discussed how to make inclusion a priority in the newsroom, featured Mark Alford from Sky Sports News, Sophia Alexandra Hall from Classic FM and freelance broadcast journalist Sanny Rudravajhala. It was chaired by Joanna Webster, deputy global editor, visuals at Reuters.

The panel discussed the challenges facing newsrooms and managers to make sure all voices are heard, and how journalists themselves can access support. 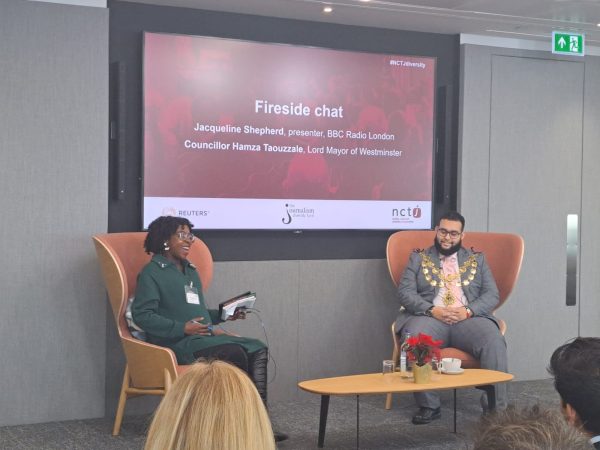 Cllr Taouzzale spoke to Jacqueline about the positive reactions he has received as the first Muslim Lord Mayor and Westminster’s youngest ever incumbent, as well as his upbringing and what it was like to attend the Queen’s Platinum Jubilee celebrations and her funeral.

During the event, NCTJ chief executive Joanne Butcher thanked the 27 news and media organisations, as well as the many individuals, who give up their time to help with the work of the JDF.

Since its launch in 2005, the JDF has helped close to 500 people from diverse background get into journalism by supporting their training and living costs.

Shannon Beck was awarded this year’s Claire Prosser bursary, which helps people from all walks of life into broadcast and digital careers. It was set up in the memory of founder and former director of the BBC Journalism Trainee Scheme, Claire Prosser, who died suddenly in 2014.

Shannon, who is studying at News Associates in Manchester, comes from a single parent low socio-economic background and hopes to use this to promote diversity in the newsroom.

The bursary was presented to Shannon at the conference by Claire’s daughter, Ellen Clabburn.

Edward Hardy, who is studying at News Associates in Manchester, was also presented with the Thomas Read bursary, which is awarded each year to a JDF recipient who has a long-term illness, health problem or disability.

The bursary was set up in the memory of the Sky Sports News journalist Thomas Read, who died unexpectedly in 2015, aged 25. 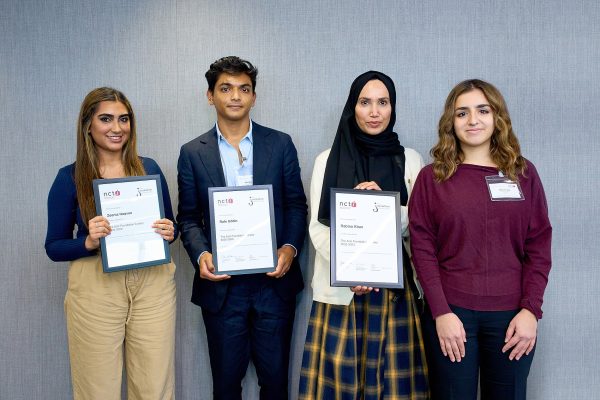 Neil O’Brien, commercial director of NLA media access, presented the cheque for £100,000 to Kim Fletcher, chairman of the NCTJ.