Eleven students have been rewarded for their hard work in the Diploma in Journalism exams after being presented with awards at the annual NCTJ Student Council meeting, which was hosted by BBC Academy Birmingham on Friday, 2 February.

The awards were presented to the top-performing students in the NCTJ diploma exams during the 2016-17 academic year at the ceremony, which was hosted by regional and national television journalist Nick Owen, currently presenter of BBC Midlands Today. Each winner received a certificate and a cheque for £250.

Addressing students, Nick said: “The NCTJ demands such a high standard from students and trainees because that’s what will be expected of you in this exciting and competitive industry”. He added: “Passing the diploma exams is a great achievement, but to get the highest marks in the UK is exceptional”. 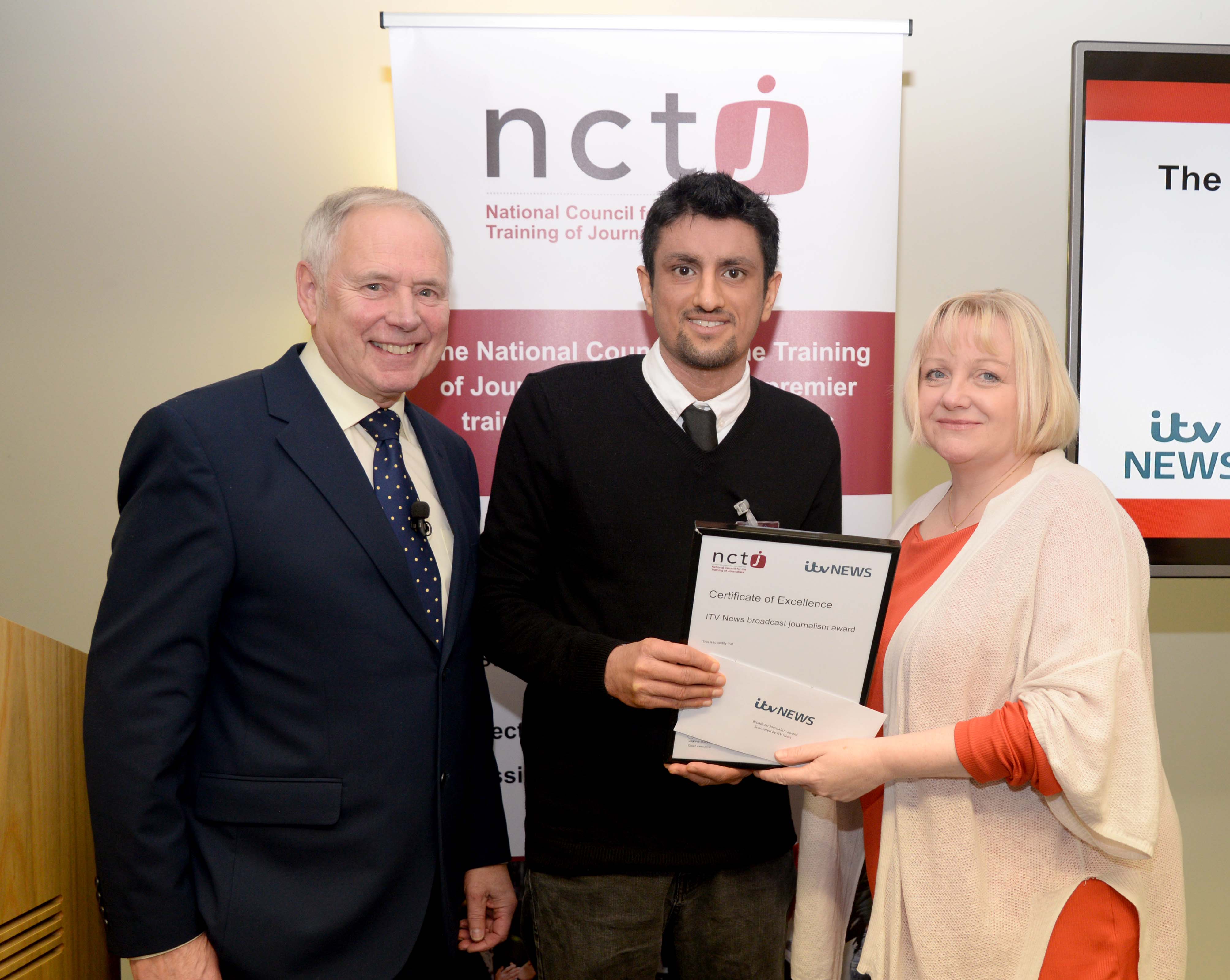 The first award, sponsored by ITV news, was presented to Atif Rashid for top marks in the broadcast journalism assessments. Atif is in the final few months of his digital journalism apprenticeship with the BBC. Based in Berkshire, he has made viral videos, radio packages and reported at elections. Atif trained at City of Wolverhampton College in partnership with the BBC Academy. Catherine Houlihan, managing editor of ITV Border presented Atif with his award.

Atif said: “Without the support, training and help from BBC Academy and City of Wolverhampton College, I would never have achieved this. It just goes to show, you don’t know what you’re capable of until you try it and you’ll end up surprising yourself many times.” 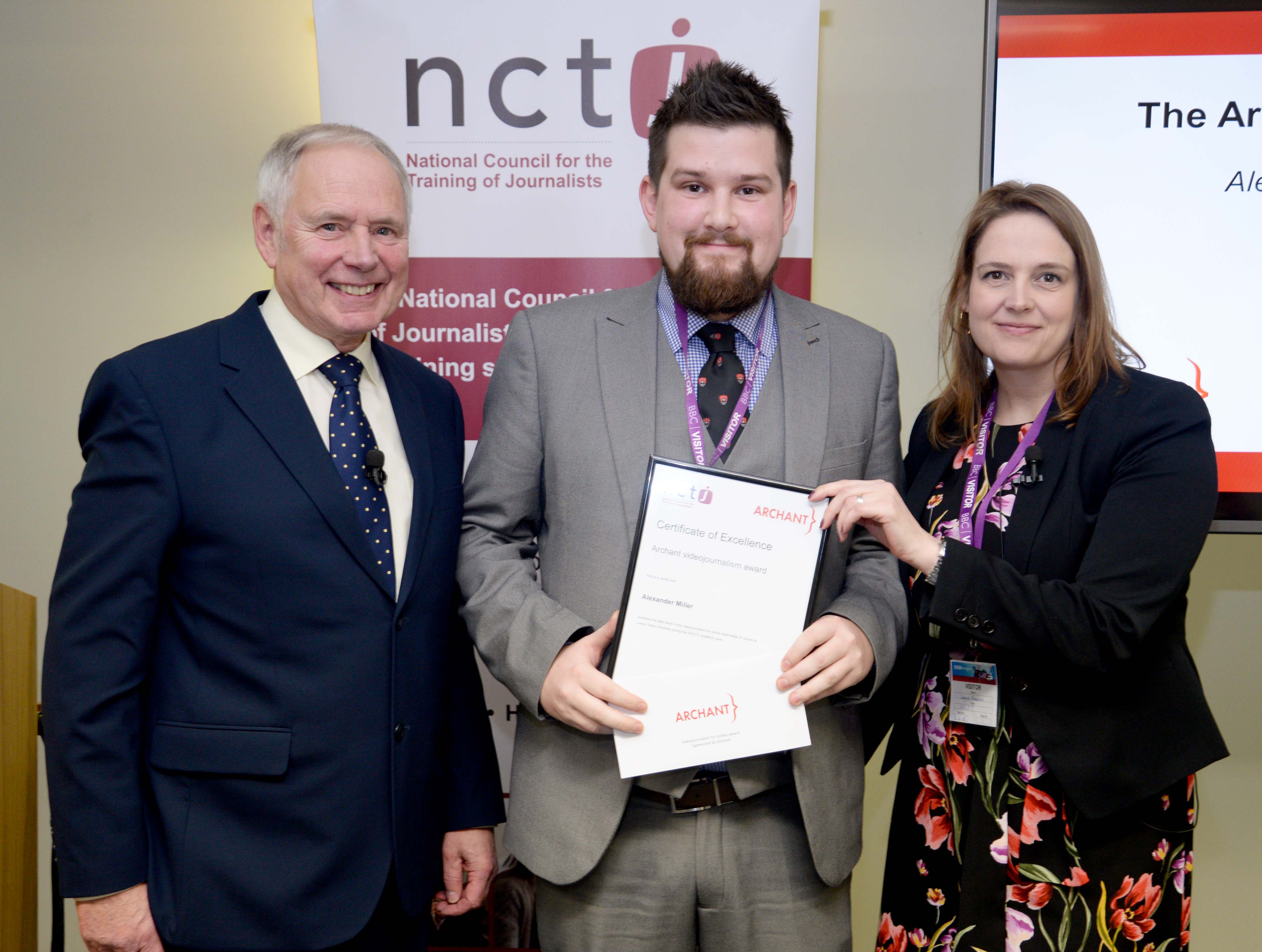 Alex Miller won the Archant videojournalism award, which was presented by Laura Adams, editorial director of Archant London, Herts and Cambs. Alex achieved the best overall performance in the two video journalism assessments while studying towards a masters alongside the NCTJ diploma at Leeds Trinity University. He is now working as a trainee reporter with the Halifax Courier.

Alex said: “I was shocked but very proud to have won this year’s NCTJ award for videojournalism. Collecting the award was a special moment and I’d like to thank everyone at the Centre of Journalism at Leeds Trinity University for their guidance, especially Lindsay Eastwood, who was the leader of the module. This is as much her award as it is mine!” 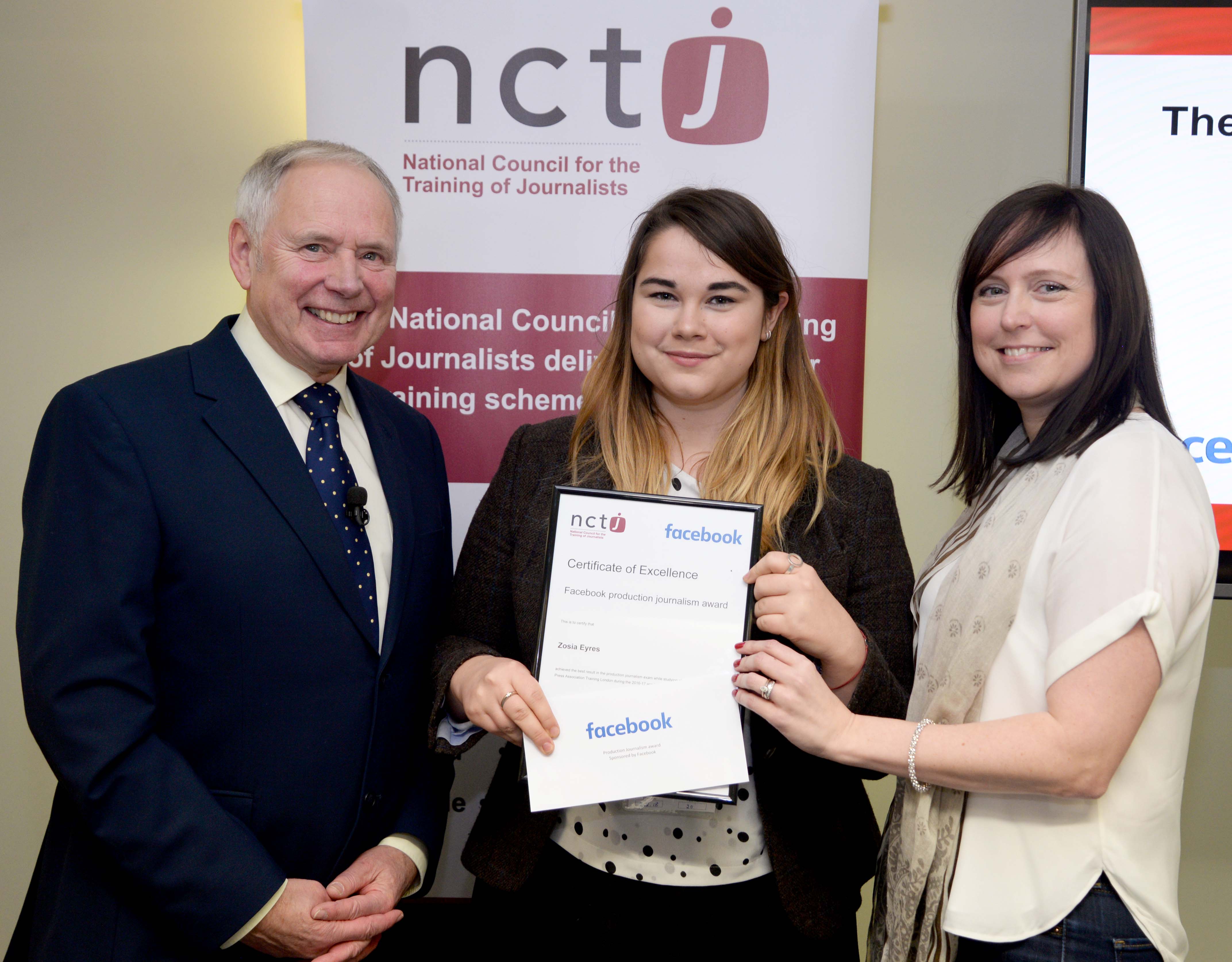 Zosia Eyres picked up the production journalism award, which was presented by Abbie Scott, deputy managing editor, Financial Times on behalf of award sponsor Facebook. Zosia completed her NCTJ course at Press Association Training in London after graduating from Durham University. She has worked as a trainee reporter for the Surrey Advertiser and Get Surrey website for the last year and plans to sit her senior exams later this year.

Matthew, who also achieved 120 wpm in his first year, presents a fortnightly student radio show and recently had a week’s work experience at the Warrington Guardian.

Sean has had experience at The Independent, ESPN and Crystal Palace FC, and is currently doing social media work for Portsmouth FC. Sean has campaigned for LGBT rights in sport, appearing on BBC Radio 5Live about the matter. His passion is blogging and podcasting about Tottenham Hotspur.

Sean said: “I’m absolutely and thoroughly delighted to have won the NCTJ’s sports journalism award. I’ve been smiling from ear to ear and I can’t put into words just how proud I am.”

The full list of award winners is as follows: