“As the first recipient of the Claire Prosser Bursary Award, your university fees will be taken care of and you’ll be doing lots of work experience. Your first week is with the BBC…in London.”
“I’m sorry, I think you’ve dialled the wrong number.” 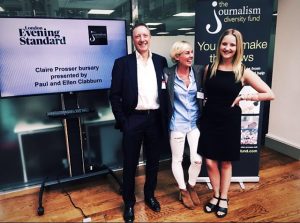 As it transpired, The National Council for the Training of Journalists hadn’t dialled the wrong number, and so, here I am, one year on from that phone call, with a Masters in Journalism under my belt, desperately trying to select one special, distinguishing memory from my week long stint at the BBC.

I figured I could talk about being unusually quiescent, hunkered beside reporter, Katie Razzall, barely daring to breath, as she seamlessly added the finishing audio touches to the 7 month long Panorama investigation, “Cadet Abuse Cover Up.” The scale of which, it has been said, is likely to rival similar scandals, such as that of Jimmy Saville and the Catholic Church.

Or, perhaps, I could regale you with tales of being invited to become an honorary member of the Jeremy Vine radio show team, and tell you how I tried, with palpable desperation, to retain an air of reticence, composure and professionalism……it’s not everyday you get to hang out with someone whom you have always admired from a distance.

But for me, being sent out on location to Grenfell Towers post 14th June 2017, was an experience that will remain etched in my mind for a very long time.

On this day, I saw in practice, how good journalism collates raw and upsetting facts, identifies the fundamental who, what, where and when questions and delivers them in a clear and concise manner to their audience.

In effect, I learned that good journalism tells a story, it is able to assimilate the big truths, and quickly reconcile the ego when the facts don’t tally with that truth.

An opportunity to be part of a group of people reporting on the aftermath of a tragedy of this magnitude required a level of humility, sensitivity and understanding that can’t be taught in a lecture theatre.

I was acutely aware that being in North Kensington, in the weeks that followed that awful night, listening to members of a community overwrought with grief and anger, was a privilege that is not afforded to many journalists who are still very much earning their stripes. But that is exactly the legacy that Claire’s family have carved in her honour.

It leaves me beyond humbled to know that a woman I have never met, and never will, has cleared a pathway of prospects, that for me and others in similar situations, would quite simply, otherwise, be unattainable.