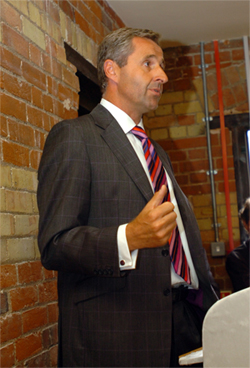 Bournemouth on 27 November. He will also present the 2013 Awards for Excellence in Journalism to students, trainees and heads of journalism from the top performing NCTJ-accredited journalism courses.

The awards dinner will be held in the Print Room, former home of the Bournemouth Echo printing presses. Mark, an NCTJ alumnus who completed his course at Highbury College, will be on familiar ground as he began his career as a trainee reporter at the paper in 1976.

He then worked as both a news and sports reporter for the BBC, before being offered a position as sports correspondent for ITN.

During a distinguished career at ITV, Mark has worked as Asia correspondent in Hong Kong and Africa correspondent in Johannesburg, reporting on the transition from apartheid to democracy, Nelson Mandela’s 1994 election victory and the genocide in Rwanda. He has also won awards for his coverage of the refugee crisis in Kosovo and the Mozambique floods in 2000.

Tickets for the awards dinner and the Journalism Skills Conference can be booked on the NCTJ’s website here.