Bursary recipients, mentors, sponsors and supporters were in attendance at the NCTJ’s equality, diversity and inclusion conference at Reuters today to celebrate the work of the Journalism Diversity Fund (JDF).

Since its launch in 2005, the JDF has awarded 340 bursaries to fund the journalism training of diverse students.

Bree Johnson-Obeng was awarded this year’s Claire Prosser bursary, which helps people from all walks of life into broadcast and digital careers. It was set up in the memory of founder and former director of the BBC Journalism Trainee Scheme, Claire Prosser, who died suddenly in 2014.

Bree, who is studying on the fast-track news reporting course with PA Training, has demonstrated great determination and dedication to succeed, completing her final year of university battling PTSD after experiencing a terror attack and homelessness.

The bursary was awarded to Bree at the conference by Claire’s daughter, Ellen Clabburn.

Two recipients were also presented with the Thomas Ready bursary, which is awarded each year to a JDF recipient who has a long-term illness, health problem or disability.

The bursary was set up in the memory of the Sky Sports News journalist Thomas Read, who died unexpectedly in 2015, aged 25. Thomas was an inspirational journalist who, in spite of his cerebral palsy, achieved a substantial amount in the field of journalism in a short space of time.

Kate would like to help promote the fact that visually impaired, and other disabled, people take part in sports as often and fully as their peers.

Amy says journalism has helped her overcome anxiety, and she hopes to become part of the next generation of journalists who are a truer representation of the public.

Kate and Amy were awarded their bursaries by Thomas’ brother, Jamie Read.

Neil O’Brien, commercial director of NLA media access, presented the cheque for £100,000 to Kim Fletcher, chairman of the NCTJ.

Two former Journalism Diversity Fund recipients were also welcomed to the stage to share their experiences with the audience. 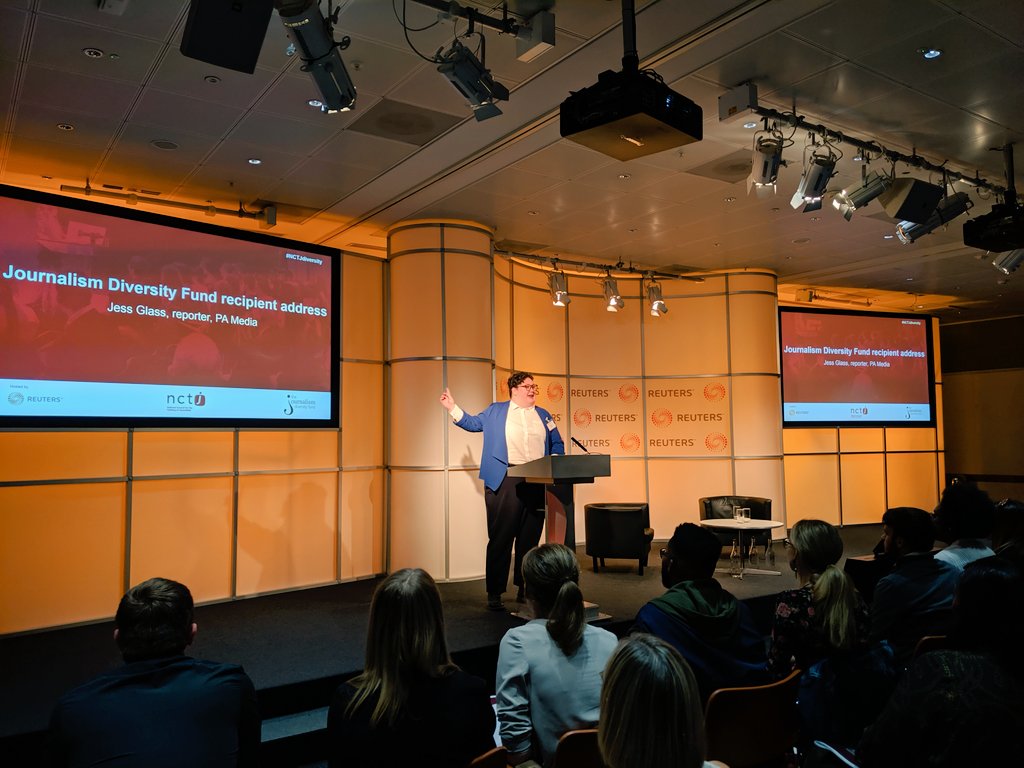 Jess Glass, who studied at News Associates in London and is now a reporter for PA Media, said: “I’m a gay, trans orphan from a working-class background and I felt that any one of those identities would disqualify me from a career in the industry.

“Getting the bursary not only meant I could afford to study, but it’s given me that reassurance that actually I do belong in this industry and there’s something really comforting about knowing that there are tangible attempts to make journalism a better place.”

Yusaf Khan, who studied at Cardiff University and is now a reporter for Business Insider, offered his advice to students: “Take every opportunity to email your local newspaper to see if they can take you on or take your pitches. If you know someone who needs something written, ask to do it – just try to get as much experience as possible.

“I want to say a big thanks to the JDF as it helped me get through my course financially, but more importantly it got me my first proper job as a journalist. That’s something I will always be truly grateful for.”