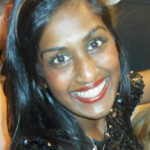 As I near the end of my NCTJ diploma at News Associates, London, it’s now more than ever that I feel inspired to pursue my goal of becoming a broadcast journalist.

During the course I have tried to use the diversity of my Sri Lankan heritage to explore and develop topical subjects.

Last month, I wrote a feature on the 2004 Boxing Day Tsunami to mark its 10th anniversary. After Indonesia, Sri Lanka was the second hardest-hit country alongside India and Thailand.

As part of the feature, I decided to try speak to Sri Lankan survivors about their own personal experience of the deadly disaster. Given the raw and sensitive nature of the topic this proved to be a difficult task.

I was nevertheless fortunate enough to eventually be given the opportunity to interview a priest who encountered the waves first-hand in Matara, Sri Lanka.

To date, this has been the most fulfilling piece I have written. Not only was I able to gain close insight into the way that my homeland and its people were affected, but I was also able to engage with my background by giving a voice to a Tsunami survivor.

Whilst Father Charles described the devastation that the Tsunami brought, he also spoke of how it united the world.

He said: “It was a time when the world came together. It didn’t matter what nationality or religion people were. Whether German, French, Sinhalese, Tamil, Buddhist or Catholic, there was one language we all had in common – the language of love.”

The hope and mutual respect for diversity that Fr. Charles spoke of, is the very hope and diversity I wanted my feature to inspire.

In the future I hope to delve into issues that are morally and intellectually thought provoking for my readers and viewers, like with my Tsunami piece.

I want to do this specifically through broadcast journalism by creating documentaries and video blogs that cover diverse issues like arranged marriages and female genital mutilation (FGM).

Currently, I’m in the process of creating a video project on multiculturalism. As a Sri Lankan growing up in England I want to use my dual perspective to explore how easily different cultures, traditions and customs are upheld in society. Alternatively, I plan to examine the strains that also come with this.

As part of my project, I want to interview people of different cultures and social backgrounds to gain an insight into their perceptions and experiences of growing up in a ‘multicultural’ England.

Being on the NCTJ has encouraged me to bring ideas to life that I perhaps thought were not good enough before.

Sometimes all it takes to inspire a journalist to pursue an idea is something someone says or observing something on a particular day.

Sometimes this is all it takes for news that lacks coverage to suddenly flourish.

Click here to find out more about the multimedia journalism course at News Associates.