Promising young journalists and photographers were presented with their NCTJ Awards for Excellence at the Journalism Skills Conference in Bournemouth on Wednesday, 27 November. 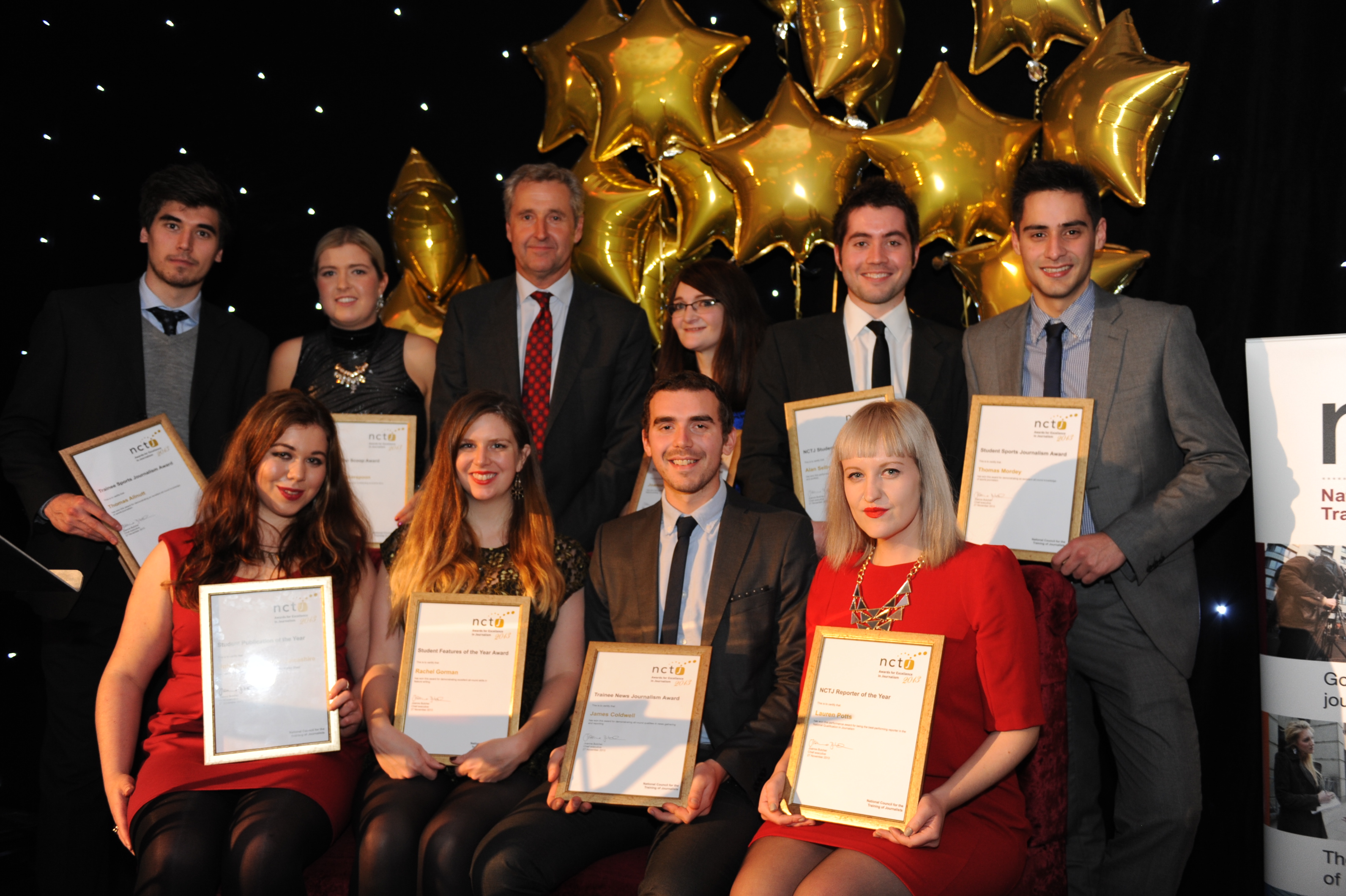 Two performance awards, NCTJ student journalist of the year and NCTJ trainee of the year, were also presented.

The students and trainees received their awards in front of a host of journalists, editors and tutors at the annual gala dinner, held this year in the Print Room, the former home of the Bournemouth Echo printing presses.

Announcing the award winners, Kim Fletcher, NCTJ chairman, said: “Journalists have not had the greatest year, but the young people here to collect their awards tonight are proof that the hallmarks of great journalism endure: hard work, determination and quality stories. Each of them are thoroughly deserving of their awards and I have no doubt that the future of our industry will be safe in their hands.”

He added the judges had been “very impressed” by the quality of entries and commended all those who were shortlisted for the awards.

Alan Selby, who recently completed a part-time NCTJ-accredited MA at Brunel University, scooped this year’s student journalist of the year award. Alan passed all his NCTJ exams in the first sitting with top grades and achieved 120 wpm shorthand. Before graduating from his course, he secured a place on Trinity Mirror’s training scheme. Following further training across the Mirror’s regional and national titles, Alan hopes to become a political correspondent.

The NCTJ reporter of the year award went to Lauren Potts. Lauren joined the Pontefract & Castleford Express as a trainee reporter having completed the NCTJ-accredited course at News Associates in Manchester. She passed the NCE (now NQJ) in November 2012 with the highest marks in the country during the year.

Lauren said: “It’s a privilege to be given such a prestigious award and it was the last thing I expected. It’s made all those nights sitting with McNae’s in the run-up to the exams worth it.”

Eleanor Ross, who studied at News Associates, London and now works as a freelance reporter for The Sun online, was the winner of the student news journalism award. Eleanor was praised for her entries, including a report on the occupation of a Battersea Park playground by protesters, with the panel commenting she “clearly has an eye for a story”.

The winner of the student sports journalism award was Thomas Mordey, who recently completed the NCTJ-accredited MA at the University of Sheffield and is now a graduate trainee at Sky Sports News. Thomas impressed the judges with his features on the evolution of climbing and the impact of sponsorship on extreme sports.

Speaking about his win, Thomas said: “I am delighted to have won the award. To have achieved some recognition in my chosen field hopefully shows I’m on the right career path and I hope that having the honour of the award on my CV can help me progress even further in journalism.”

Thomas Allnutt, sports journalist at Newsquest Herts, North and East London, was awarded the trainee sports journalism award. Thomas previously completed the NCTJ-accredited fast-track at News Associates in London. He said: “Covering sport has always been my dream career and my first couple of years on the job have been just as exciting as I’d hoped.”

Since completing her NCTJ course at Nottingham Trent University earlier this year, Rachel has started work as a freelance journalist for The Nottingham Post.

Joanna Morris, who currently works for the Northern Echo won the trainee features award. The judges were impressed by her “engaging writing style, colourful, evocative and revealing first-person account of what it’s like to be homeless.”

The top scoop/exclusive award winners were University of Salford student Sophie Mei Lan Slack, and Dundee Evening Telegraph trainee reporter, Lauren Witherspoon. The judges said Sophie’s submission on survivors of child sex abuse “sheds genuinely new light on a topic that could scarcely be of greater public importance.” Lauren was praised by the judges for following her news radar in the face of official obstruction in her story about a 12-year-old being charged with stealing a car involved in a road traffic collision.

The student and trainee image awards went to Sheffield College student Tom Maddick, and North West Evening Mail photographer, Harry Atkinson. Both faced stiff competition in their individual categories but the judges believed their pictures stood out as they were both able to capture exclusive and emotional images.

The best student publication award, was presented to the University of Central Lancashire. Their magazine, The Baking Sheet, was produced for independent UK bakeries by students in the NCTJ-accredited BA honours in journalism course. The judges (Ian Carter, editorial director at Kent Messenger Group, and Andrew Parkes, group managing editor for Newsquest South London) said:

“A superb entry that adopted a completely different approach to crack a niche market. Certainly cashing in on a craze sweeping the country, this entry used some great design and really interesting features to drag the reader in. It doesn’t matter whether you like baking or not, you’ll love this magazine.”