Media industry professionals, bursary recipients and their tutors met on Thursday to celebrate the success of the Journalism Diversity Fund. More than 60 guests attended the annual lunch, which this year was hosted by The Sun at News UK, Thomas Square, London.
Richard Barun, deputy managing editor of The Sun, welcomed guests and praised the fund for the “tremendous achievement” of helping over 150 recipients to complete their journalism training in the past seven years.

David Pugh, managing director of NLA media access, presented Kim Fletcher, chairman of the NCTJ with a cheque for £100,000 to continue the work of the diversity fund. 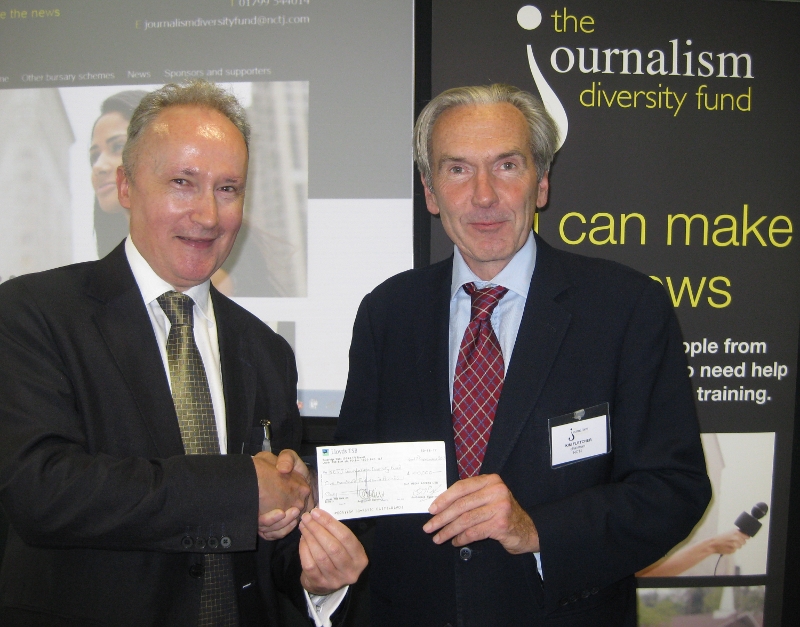 David Pugh said: “NLA media access sponsorship provides the Journalism Diversity Fund with practical support, which enables people from a wide variety of backgrounds to become journalists – paying for course fees, living expenses – and from this year funding paid internships. Our donation, which totals £880k this year, is made on behalf of national newspaper publishers – who hope to see Journalism Diversity Fund graduates appearing in their newsrooms in the coming years”.

Also speaking at the event was Ian Murray, editor-in-chief of Southern Daily Echo and vice-president of the Society of Editors. Ian said: “We hope that one day the Journalism Diversity Fund will no longer be needed but we know that will not be the case for quite some time. We need more editors to come on board, we need more companies to come on board, not only to donate, but also to play a part in mentoring and adding to the fabulous work that is going on already.”

Two former gold standard NCTJ students who received bursaries also spoke about how the fund helped to kick-start their careers in journalism. Dan Cooper, who was awarded a bursary in 2012 to study at News Associates and now works as a reporter for the Newbury Weekly News, told guests how the diversity fund had made a difference to him.

Describing himself as from a working class, single parent family, he said: “I’ll always be grateful for the support and the faith that the Journalism Diversity Fund have shown in me. Without their help I would not have been able to afford to do the NCTJ course and go on to become a journalist and I can’t wait to see where the next year will take me.”

Fellow recipient Khaleda Rahman, who was the first bursary recipient to take part in the Journalism Diversity Fund internship scheme, will be working as the journalism intern for the NCTJ before taking up a position as a reporter at the News Shopper.

She said: “Diversity in the media is something I believe in strongly, newsrooms should reflect the communities they represent- and I plan on promoting the fund as widely as possible to reach more prospective applicants and help other budding journalists get the same support I did. The Journalism Diversity Fund has been instrumental in helping me get my foot in the door and hopefully they will continue to do the same for others from ethnically and socially diverse backgrounds for many years to come.”

Applications for the Journalism Diversity Fund are now welcome for courses beginning in early 2013. Please click here to find out more information. Applicants can be sixth-formers, graduates or mature students, but they must have applied to an NCTJ-accredited course starting in early 2014 or later and have a genuine need for a bursary. The deadline for applications is Wednesday, 6 November 2013.