By Jon Cronshaw, Journalism Diversity Fund recipient 2012/13
Recently I spent a fortnight at The Guardian on a work experience placement as part of 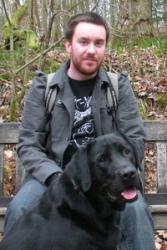 their Positive Action Scheme which, like the Journalism Diversity Fund, is a programme designed to open news rooms to a more representative range of journalists.

I’m an aspiring cultural journalist doing an MA in Magazine Journalism at Leeds Trinity University – I am also visually impaired and use a guide dog to aid mobility.

My first week was spent working in the multimedia hub. I got to experience first-hand the recording of their Tech Weekly and Music Weekly podcasts, as well as their audio edition of the paper – this was a fantastic insight.

As well as doing a lot of writing (too much, probably), I try to do as many interviews as possible using a FlashMic so I can embed broadcast quality audio into my online posts (see for example what I’ve been doing on my blog www.leedsartscene.co.uk). I picked up some great tips and tricks about audio editing that will hopefully make my future work sound more polished.

The second week was spent on the culture desk, initially working on various pieces for their music and film blogs, as well as writing features on visual arts. I learnt most on my final day working closely with one of their subs who helped me to bring my feature writing to a higher level and explained the secrets to writing a good headline and stand-first.

While there, quite a few journalists told me that it was the first time they’d ever had a guide dog in the offices. This was quite surprising – I know that I’m not the only visually impaired journalist, and I know that I’m not the only journalist with a guide dog. This tells me that the Positive Action Scheme is needed, and I was keen to knuckle down and get on with my tasks. My aim was to quickly get noticed because of the quality of my journalism; I did not want to be perceived as being there for tokenistic reasons.

My experience at the Guardian was excellent – it was great being there when two major whistle-blower stories broke, reinforcing the importance of what journalists and news organisations do.

But more than anything else, it was the advice received from established journalists and editors that made the experience so rewarding.