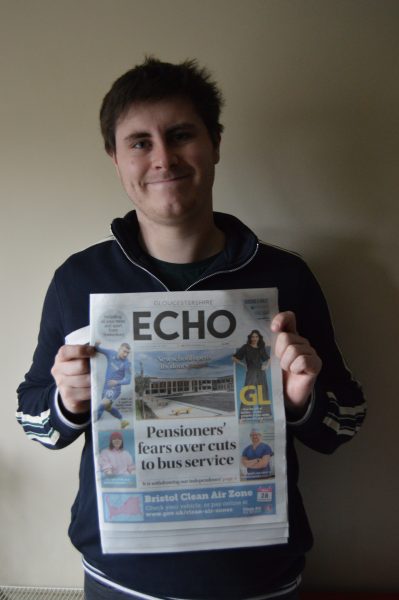 Community reporter Will Luker with his first front page splash

A community reporter’s first splash is often testament to their local connections and commitment to getting untold voices heard.

This is especially true for Will Luker, community news reporter for Gloucestershire Live, whose story about the impact of cuts to a village bus service landed the coveted front page spot for sister paper the Gloucestershire Echo.

Having already established that Stagecoach was cutting services in the area, Will connected with elderly residents who rely on the bus in Woodmancote, a village in his patch of Tewkesbury.

To find out how the community was impacted by the changes, Will, 25, spoke to residents at a parish council meeting and reached out to those affected in a local Facebook group.

He said: “We were aware that the elderly population in Woodmancote is rising and it was mainly elderly people using that bus. There’s no need for children to use the bus as the school is down the road.

“The story came about after I attended the parish council meeting and villagers had launched a petition to save the bus service.

“I interviewed people who were elderly and disabled. One of the residents was blind and I met him because I posted in the Facebook group to say I was writing a story about the bus cuts.”

Will opted to meet Derek Thorpe, 71, who has been blind since 1991, at his home in Woodmancote to carry out the interview.

Realising the potential video journalism opportunities the story offered, Will asked Derek if he would mind walking to his nearest bus stop to have his concerns filmed.

Will, who is currently studying for his NCTJ Diploma in Journalism remotely with Darlington College, said: “Having the bus stop in the background helped the story have an impact, and I made sure he could get to the bus stop ok.

“I had my videojournalism exam a couple of weeks ago and if I hadn’t had that training, I wouldn’t have known what to do with that video or how to do the overlay shots.

“It has given me more confidence with shooting videos and I am starting to get an understanding of when videos go well with stories.”

Will, who received an A in his videojournalism exam, said he was “delighted” when he realised his story was going to make the front page of the paper – his first splash.

He said: “I realised when the print editors were asking for the pictures of the people I had interviewed.

“It came as a surprise because I didn’t really expect it to be on the front page, but I did know a lot of people cared about the issue.

“I also want to do a shout out, because we had another story on the front page about a journalism student from the University of Gloucestershire who was an amputee. It was a first-person piece about his experiences of being an amputee in Cheltenham.”

Will, who joined the Community News Project partnership between Meta, the NCTJ and 23 regional publishers in May 2022, said he is hoping to use 2023 to forge new community connections.

He said: “There’s certainly more engagement to be done. I’d like to make more connections with untouched communities that aren’t well represented in the paper. I am starting to make connections with the Ukrainian community in Gloucestershire as we’re approaching the year anniversary of the invasion.”

Ed Stilliard, content editor for GloucestershireLive, said: “Will’s story on the bus cuts in Woodmancote show how much his journalism skills have grown since he started working for us.

“We’ve tasked him with getting in touch with some of the county’s communities who perhaps don’t get as much coverage as others do and reporting on their issues. His story about the loss of independence to some people in Woodmancote because of the bus cuts is testament to this.

“Not only is he getting known among contacts in Gloucestershire as the go-to reporter for their issues, his confidence in some topics, and his writing ability have come a long way since he started working for us.

“At Gloucestershire Live we also have to do live broadcasts on Facebook and this is something he’s really taken to, like a duck to water. He beams with confidence talking on a variety of topics and with his natural abilities to record a Facebook Live, we often turn to him. We look forward to seeing his journalism skills go from strength to strength.”