Community reporters from across England, Scotland and Wales have attended a two-day skills bootcamp at Facebook. 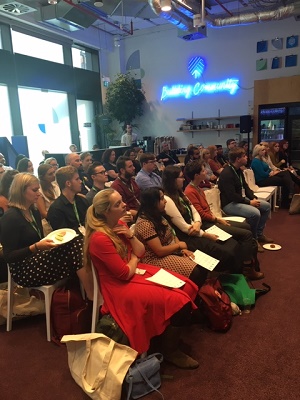 Thirty-six reporters from seven regional newspaper publishers, all recruited as part of the Community News Project, came together in London this week for an intensive series of seminars and workshops, covering a range of practical subjects.

Dean Arnett gave a masterclass in creating great video, while Laura Byrne from Storyful discussed key verification techniques. The reporters also learned how to get the best from tools such as CrowdTangle and discussed the importance of building a journalistic brand.

Alison Bagley, community reporter at the Northamptonshire Telegraph said: “The bootcamp was great. We heard from an amazing panoply of knowledgeable and relevant speakers, and after the two days, I felt like I’d run a marathon with an equal amount of exhaustion and euphoria.”

Launched earlier this year, the Community News Project is a partnership between Facebook, the NCTJ and nine regional news publishers which has created 83 new roles focussed on the coverage of previously underserved communities.

Will Gore, head of partnerships and projects at the NCTJ, said: “It’s fantastic to see the community reporters growing into their roles, learning as they go – both in the newsroom and in training sessions.

“Speaking to these dedicated journalists over the last two days brought home to me again just what an impressive job they are doing, getting out into communities that are often crying out to tell their stories.”

As well as attending Facebook’s skills bootcamp, the CNP reporters are all working towards an NCTJ qualification – either the Diploma in Journalism or, in some cases, the National Qualification in Journalism.

Training is being delivered by Bournemouth University, The Sheffield College, Darlington College, Glasgow Caledonian University and the Bauer Academy. The NCTJ is offering additional webinars as part of the project.

Nick Wrenn, head of news partnerships, EMEA, at Facebook said: “It was a privilege to host this latest intake of community news reporters and learn from them about the journalism they are already doing for their diverse audiences across the UK.

“Training is a vital part of the project and we are delighted we can help facilitate this. We look forward to doing more of these bootcamps with the journalists next year.”