Media professionals, bursary recipients and their tutors gathered to celebrate the success of the Journalism Diversity Fund on Thursday, 25 September. More than 70 guests attended the annual lunch which was hosted by the BBC, at New Broadcasting House, London.

Keith Blackmore, managing editor of news and current affairs at the BBC, welcomed guests and praised the fund for helping over 174 recipients to complete their journalism training in the past nine years.

Keith said: “Journalism has never been more under attack. We have to find talent from the widest possible pool without restrictions of any sort and this admirable fund run by the NCTJ is a very good start that aims to improve the industry.”

Since the fund was launched at the Society of Editors’ conference in 2005, many of the previous bursary recipients are working as journalists all around the UK and a couple have gone on to become editors at highly respected news organisations, including The Guardian and The Independent. 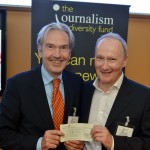 David Pugh, managing director of NLA media access, presented Kim Fletcher, chairman of the NCTJ, with a cheque for £100,000 to continue the work of the diversity fund. Others sponsors include Associated Newspapers, Creative Access, NLA media access, NCTJ, The Scott Trust and Sky. 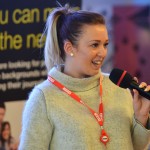 helped to kick-start their careers in journalism. Megan Bramall, who gained the gold standard at News Associates Manchester and now works as a BBC journalism trainee told guests how the diversity fund made a difference to her.

She said: “Without the fund a career in journalism would not have been possible and I would not have been where I am now. My advice to people who receive help from the fund this year is that wherever you go, don’t hide your diversity. As a recipient, it is your responsibility to represent that diversity and tell the stories from the community you come from.” 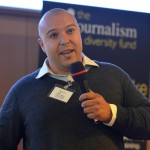 Fellow recipient Layth Yousif, studied at Lambeth College and has since been commissioned to write a book on French football manager Arsene Wenger while also working as a reporter for the Bedford Times & Citizen.

He said: “My mum and dad arrived in this wonderful country in the 1970s without a penny in their pocket, all they had was a strong work ethic and a lot of my friends from the place I grew up left school without any qualifications. The Journalism Diversity Fund is a massive force for good and working as a journalist I never get that Sunday feeling anymore. I love what I do.”

Click here to have a look at more pictures from the Journalism Diversity Fund lunch.

Applications for the Journalism Diversity Fund are now welcome for courses beginning in early 2015. Please click here to find out more information. Applicants can be sixth-formers, graduates or mature students, but they must have applied to an NCTJ-accredited course starting in early 2015 or later and have a genuine need for a bursary. The deadline for applications is Wednesday, 5 November 2014.