Alex Crawford, special correspondent for Sky News and patron of the NCTJ, has written about how the events in Afghanistan have “highlighted what a band of brothers and sisters we are and how a common faith and passion in all that the profession stands for has brought out the best in many” in the NCTJ’s 2020-21 annual report.

This year may go down as the year journalists fought back. And my God, they did it in style. 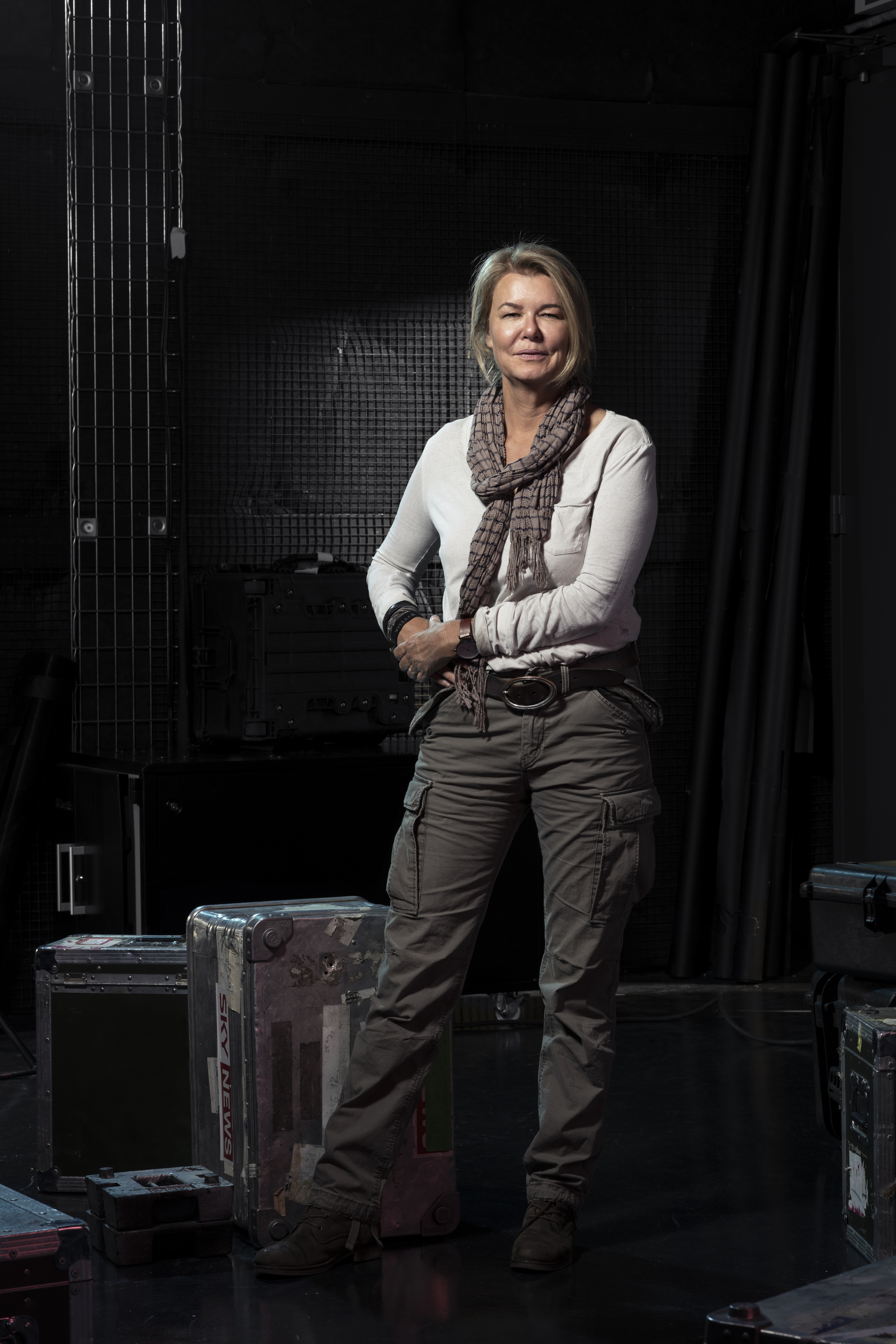 Afghanistan was one of journalism’s significant turning points. Not just for the country and geopolitics – because what happened in August is undoubtedly seismic. But for this generation of journalists, it brought home dramatically and terrifyingly just how much is at stake for our profession. And they rose to the occasion in a quite astonishing and brave way.

Journalists from across the globe watched as our Afghan brothers and sisters fought for their lives in the face of the advancing Taliban. We looked on horrified as they were beaten and tortured by them, much safer in our Western skins and cloaked in a certain security by dint of the foreign passports we hold.

My team interviewed two incredibly courageous young Afghan journalists – both in their mid-twenties – who’d been held for hours by the Taliban and whipped with cables. They passed out with the pain several times. Their backs and their thighs were a mass of red welts and angry bruises. They winced as they took off their shirts and trousers to show us their torture scars. They’d been covering a womens’ rights demonstration and that was enough to get them arrested by armed Taliban guards. By the time they were released they could barely walk and had to be helped by colleagues.

But both were back in the newsroom and at their desks the day after their ordeal. Both determined not to be cowed and to continue to search for and document the truth. Both resolutely speaking out about their ordeal, undaunted by the knowledge this would almost certainly lead to more unwanted Taliban attention. Amazing courage. Astounding determination.

Both seemed to accept they may end up dying for their job eventually – and both were convinced it was a job worth this suffering and terror. They are teaching us lessons in journalistic standards and ethics I hope most of us are never faced with. But my gosh, we are learning from them and others who are driven to the edge of despair by autocratic rulers and Governments – and somehow find the reserves to stand up, fight and be counted.

The events in Afghanistan have also highlighted what a band of brothers and sisters we are and how a common faith and passion in all that the profession stands for has brought out the best in many, at a time when the very worst appears to be unfolding in front of us.

So many journalists – some I have the privilege of knowing and many more who are strangers – came together, setting aside rivalries and tribal competition and stepped up to help or highlight what was happening, what is happening in Afghanistan then and now. Many were filing their copy or broadcasting their reports in the months, days, hours leading up to the fall of Kabul and beyond, whilst also fighting furiously hard to help fellow Afghan journalists – fixers, producers, translators – as the Taliban set about taking back power and controlling the agenda. And that meant controlling the media – starting first with the Afghan journalists themselves.

For most of the British journalists working all hours cajoling, lobbying, coaxing Western politicians to try to get their Afghan colleagues on desperately diminishing evacuation flights, this was not regarded as anything other than the most obvious of moral duties. It was an utterly natural, compassionate obligation to help those who’d worked alongside us, helped us and in many cases saved us from the authorities and the Taliban in the past, just so we could do our jobs. Now, in their hour of need, they needed our help – and journalists from all outlets banded together to try to assist. This was the other side of journalism which most of the time is not always obvious but I firmly believe, is always there.

By mid-July, the Guardian’s Emma Graham-Harrison and The Times’ Anthony Lloyd had rallied together a coalition of British newspapers and broadcasters to demand help for Afghan journalists who’d worked with British media outlets during the twenty-year-long Coalition campaign. The media group wrote a joint open letter to Foreign Secretary Dominic Raab and Boris Johnson insisting our ability to keep the British public informed of events in Afghanistan during the previous two decades had been ‘heavily reliant on the loyalty and commitment of the Afghan journalists, translators and support staff.’

At this stage the Taliban had control of more than half of the country and the letter underlined just how much danger the Afghan journalists faced from Taliban reprisals because of their association with British media organisations. At the time, US intelligence was anticipating the Afghan Government would take three months to possibly fall. In fact, the journalists’ letter could not have been more timely. Within weeks, the Country was in the hands of the Taliban.

The letter led to a dramatic u-turn on policy by the British Government and an agreement to issue visa waivers to those Afghan journalists who had helped build a vibrant, independent media – and then there was an almighty scramble to get them on flights. Many of the visiting journalists were reporting on some of the most distressing scenes in their careers – witnessing people being crushed to death in front of them, babies being handed over to soldiers, mass panic and fear – whilst also trying to manage a very personal refugee crisis and help men and women who were now dependant on them for their survival.

The Daily Mail’s Dave Williams is another Afghan veteran – who for six years has been spearheading the newspaper’s ‘Betrayal of the Brave’ campaign to help Afghan interpreters, translators, teachers and journalists get sanctuary. The fall of Kabul and the withdrawal of foreign troops suddenly plunged that campaign into frantic urgency with everything the paper had warned about suddenly coming home to roost. Reporting a story becomes an altogether very different challenge when colleagues you know, men, women and their families – are turning to you for survival.

How many received frantic phone calls, emails and pleading texts? ‘Please help me, you are a fellow journalist, you are my only hope’ was one I got. ‘I’m going to kill myself if I don’t get out. The Taliban are knocking on every door hunting us down, please help’ was another. Many of the reporters I know who’ve worked in Afghanistan received similar disturbing and heart-rending urgings.

Journalist or not, how is it possible to ignore the pleas from others, many of whom have taken extraordinary risks to keep us safe in the past? The simple answer is, it isn’t – and I know of no journalist who was there or who has covered Afghanistan who has managed to. And nor should they be castigated for doing so.

Some of my colleagues in London, some of whom have never been to Afghanistan and didn’t know any of the personnel involved, worked day and night, writing emails, bashing phones and pressing political contacts to help shift bureaucratic mountains and get their fellow journos out of the danger zone.

The journalists on the ground smuggled Afghan colleagues in vehicles, through Taliban checkpoints and through back doors into hotel rooms to keep them safe. The network stretched across the globe and included help and support from journalists in London to Kabul to Islamabad to Washington to New York to Vancouver to Dublin and to New Delhi.

I personally reached out to American, Canadian, Indian, Turkish and Pakistani journalists and all immediately jumped into action to help their fellow journalists in whatever way they could – all of us thinking ‘that could very well be us’. What happened in Afghanistan may go down in history as one of the most tragic – and some will argue – perhaps avoidable catastrophies ever but it was also completely and truly inspiring seeing how journalists rallied around each other and did what they could in the most awful of circumstances.

I was taking part in an ENEX conference recently when I was questioned about journalists ‘crossing the line’ between journalism and activism. For those who worked in Afghanistan on and off for the best part of twenty years, that was not even a question – nor was there a shred of doubt over helping colleagues, without whom we simply could not have done our jobs. And for every Dave, Emma and Anthony out there – and there are many who helped in small ways and on a grand scale – we salute you for your unquestioningly inspiring approach to journalism and to your fellow journalists. Bravo and thank you for leading the way for the rest of us.

And please, let’s remember, there are many more journalists still there who have been left behind in Afghanistan, still in hiding, still fearing for their lives. And there are others determined to continue the fight to tell the truth. We cannot and should not forget them or the terribly difficult and dangerous conditions they are working under. But as a template for camaraderie and collegiate behaviour in the future, what happened in Afghanistan and beyond should fill all journalists with fire in our bellies to go on – and emulate elsewhere.